Presentation Of Report Later This Month 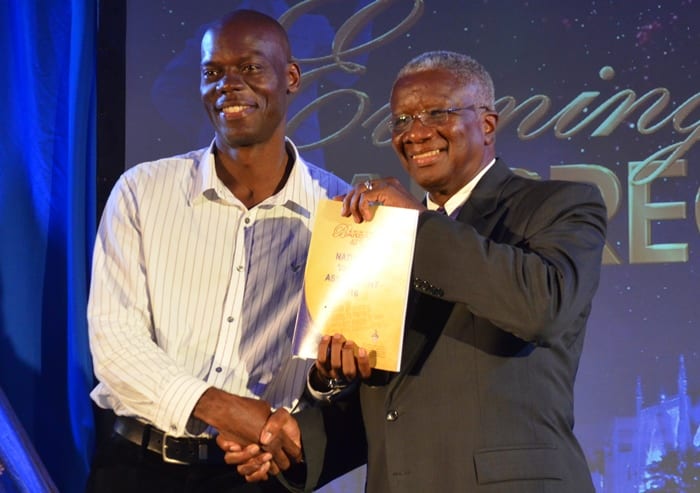 Prime Minister Freundel Stuart and SALISES Director, Dr. Don Marshall, posing with a copy of the Barbados At 50: The National Values Assessment 2016 Report at the Evening of Appreciation at Ilaro Court yesterday. (C.Pitt/BGIS)

Barbadians will soon know the findings of the Barbados At 50: The National Values Assessment 2016 Report.

This disclosure came last evening from Director of the Sir Arthur Lewis Institute of Social and Economic Studies (SALISES), Dr. Don Marshall, who said that organisation would be presenting the report on Tuesday, September 26.

He made the comments before handing over a copy of the report to Prime Minister Freundel Stuart, during an Evening of Appreciation at Ilaro Court, to recognise those involved in last year’s 50th Anniversary of Independence Celebrations.

While not going into details about the report, Dr. Marshall disclosed that the research suggested that there was an inclination towards an American values system. He noted, however, that persons had a yearning to see people again looking out for each other.

He said that based on the over 1100 persons canvassed, including secondary school children, as well as interviewees, it was clear that Barbadians loved their country.

“People care about Barbados; they care about where Barbados is going. Some have nostalgic views about Barbados; some also labour with retrospective illusions, that is, they imagine Barbados the way it never was. Nevertheless, there was a sense where people felt they had to cogitate, reflect and write about what they feel are the values we need to retain and the values that we need to drop…”

This study was commissioned last year during the Independence celebrations to ascertain what are some of those features of Barbadian life that citizens would wish to reclaim, retain or discard.