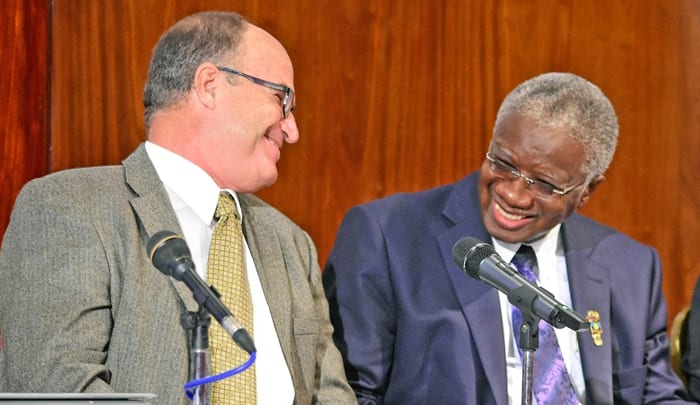 Prime Minister Freundel Stuart and Chairman of The Barbados Private Sector Association, Charles Herbert, share a light moment during the opening of the 2017 Week of Excellence at the Grande Salle, Central Bank of Barbados, yesterday. (A.Miller/BGIS)

Prime Minister Freundel Stuart has challenged individuals at all levels of the private and public sectors to bring excellence into their workplaces.

Mr. Stuart, who was at the time addressing Monday’s launch of the 2017 Week of Excellence at the Grande Salle, Central Bank of Barbados, also called on Chief Executive Officers, Permanent Secretaries and Heads of Departments to do what was in their power to “take excellence off the page and make it come alive”.

“Each of us, every day, in everything that we do, in whatever work we are engaged, should seek to find at least one thing that we can do better to increase productivity,” Mr. Stuart charged.

He stated that the Barbados Growth and Development Strategy 2013-2020, the Barbados Human Resource Development Strategy and the Skills-for-the-Future Programme were some of the initiatives which signalled Government’s commitment to human resource development. However, the Prime Minister noted that while the institutional framework was in place, excellence must still come from the individual.

“A commitment to excellence requires a personal engagement with the job; a personal understanding of the importance of what one does to the good of the nation; a personal interest in improving the lot of the nation and, by extension, that of the family,” he pointed out.

Furthermore, Mr. Stuart observed that excellence was also expected at the organisational and institutional levels, and therefore issues of general health and wellbeing, the effects of chronic non-communicable diseases, and the challenge of absenteeism, must be taken into account.

“The achievement of excellence will require a higher level of engagement by all, which in turn requires constructive relationships based on mutual respect,” he said.

The Prime Minister added that Barbadians must be inspired to reach their full potential in order to contribute to a country that is socially balanced, economically viable, environmentally sound and where there is good and honest governance.

Stating that he was awaiting the updated results from the National Initiative for Service Excellence Employee Engagement Index, Mr. Stuart noted that the discussion surrounding productivity and excellence was not new.

In fact, he challenged Barbadians to “steel themselves to face the competitive world”, especially in light of changes such as the Brexit phenomenon and the inauguration of a new United States administration.

President of the Congress of Trade Unions and Staff Associations of Barbados, Cedric Murrell; General Secretary of the Barbados Workers’ Union, Toni Moore; and Acting Governor of the Central Bank of Barbados, Cleviston Haynes also made presentations during yesterday’s opening ceremony.