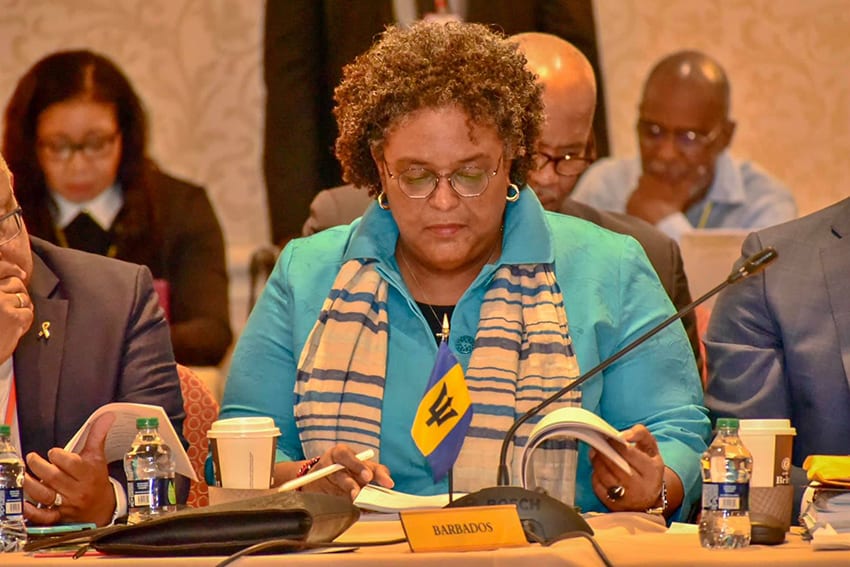 Prime Minister Mia Amor Mottley has stressed that Barbados will implement all the protocols under Contingent Rights as earmarked under the CARICOM Single Market and Economy.

She noted that Barbados intended to fully implement the protocol on Contingent Rights because she was of the view that spouses and dependents should not be separated.

She said: “So, the notion that only a spouse is to get the benefits of the rights, but dependents are not, is nonsense that carries us back to the separation of families to a time that we would want to forget rather than remember.

“…Why are we prepared to make available beyond what the protocol requires for dependents, because invariably if they are working they are doing what? They are paying taxes and they are paying National Insurance and if they are contributing to the tax base and to National Insurance, why shouldn’t they be protected?  Why shouldn’t they have access to go to school?  Not to mention that in 166 square miles, if you leave children out of a school, they become part of the criminal under class in 10 years, as we are now seeing in our own country, which was depleted of social programming regrettably of young people over the last decade.”

Further articulating the importance of Contingent Rights, Ms. Mottley stressed that when persons were deprived of access to basic health care, then the public health system became compromised.

“And the last time I checked, public health crises don’t determine who they hit based on race, colour, gender, nationality.  And therefore, all we are doing is putting at risk the entire population’s health,” she noted.

Ms. Mottley pointed out that the region did not suffer from a scarcity of people, but noted that there should not be a fear of unskilled people moving through the region and “literally depleting resources”.

She stressed that the CARICOM Member States needed to come up with better solutions to be able to drive economic growth, especially on the threshold of the third decade of the 21st century and emphasized the importance of the St. Ann’s Declaration in Port of Spain and having the private sector and the labour movement as partners in the process.

Prime Minister Mottley told her colleagues that the underperformance of Caribbean economies was not hedged on Caribbean people wanting to move from one country to another, to live and work, but it was largely as a result of not having enough people paying taxes and producing in these economies.

The two-day CARICOM summit concluded on Wednesday with the issuing of a Communiqué.