Barbados’ fiscal deficit is on the decline.

This news has come from Prime Minister Freundel Stuart, who said that preliminary estimates suggested that, compared to the previous fiscal year, the decline was sizeable, despite there being some setbacks.

Mr. Stuart made the comments on Wednesday as he addressed the Business Luncheon of the Barbados Chamber of Commerce and Industry at the Hilton Barbados Resort.

The Prime Minister continued: “The setbacks to which I refer are mainly as a result of unplanned delays in the sale of State assets, namely the Barbados National Terminal Company Ltd. and the lower than expected yield (year to date) of the National Social Responsibility Levy.

“With the deficit closing last fiscal year 2016/17 at around 6.8 per cent, it is anticipated that this gap will be closed by a further three per cent, therefore bringing the actual outturn very near to, or even surpassing, the intended target of 4.4 per cent set during the budget estimates debate last year.”

In relation to the international reserves, the Prime Minister said that at the end of September, they represented just around 8.6 weeks of import cover.

He noted, however, that there were endemic challenges to stabilising these levels as there would be events, such as large debt service payments and rising fuel prices, which could erode the small gains achieved through net project inflows, and foreign exchange earnings by the private sector. 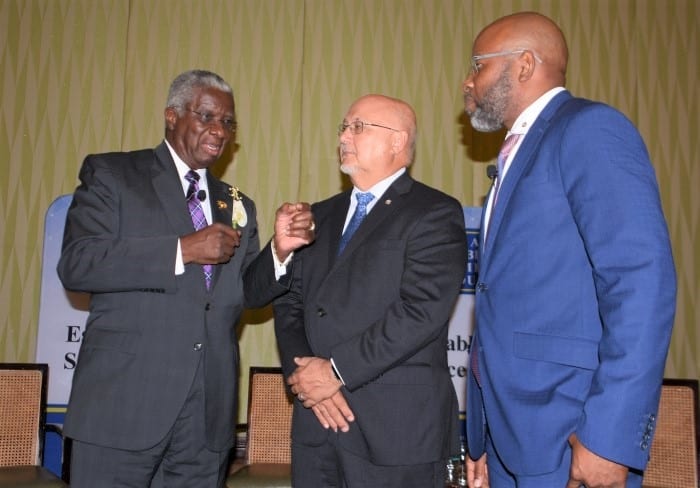 He added: “Clearly the future sustainability of our foreign reserves should be predicated on the country’s ability to earn foreign currency as opposed to Government continuously having to go to the international markets to borrow to prop up our foreign reserves. Such activity accumulates foreign debt and is, in the end, not sustainable.

“In this regard, I wish to call on the private sector to lead the effort to seriously grow our production export base to levels that would lead to a 100 per cent increase in our export of goods and services, and to see, for example, manufacturing’s contribution to our foreign exchange earnings surpassing the billion-dollar mark.”

Mr. Stuart pointed out that in the current low growth environment, Government would have to play a stronger facilitation role by promoting a business enabling policy environment.

However, he noted that for its part, the private sector must seek to capitalise on opportunities to invest and create wealth and employment. According to him, it must maintain a competitive edge by ensuring its goods and services were of a high standard and that the necessary work was done to find markets and secure financing.

“For a sustained economic recovery to be successful in the Barbadian economy, the private sector businesses have to perform at their very best in all sectors or industries, with maximum facilitation support from the public sector,” the Prime Minister suggested.