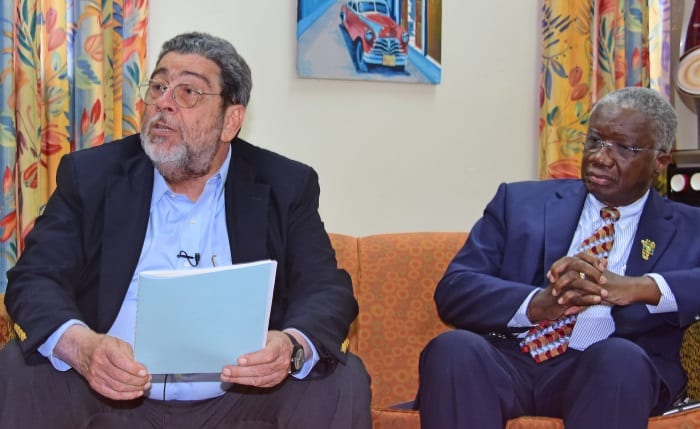 Prime Minister of St. Vincent and the Grenadines, Dr. Ralph Gonsalves, is seeking to “clear the air” on some of the misconceptions about regional air carrier LIAT.

Dr. Gonsalves, who is the Chairman of the Majority Shareholder Governments of the carrier, was in Barbados for the Prime Ministerial grouping’s quarterly meeting.

He told reporters during a press conference on Wednesday at the Lloyd Erskine Sandiford Centre that with the carrier being “very much” in the news, he wanted to share some factual information on its current status.

Stating that LIAT was one of the few airlines in the world where all of its aircraft was under two years old, the Prime Minister noted that “it cost a lot of money to re-fleet”.

“You will recall that the shareholder governments – Barbados, Antigua and Barbuda and St. Vincent and the Grenadines had secured a loan from the Caribbean Development Bank for an investment for the re-fleeting … So, a few years ago, we carried out the re-fleeting exercise and we have disposed of the last Dash Eights,” je said.

Adding that at one time LIAT had 16 or 17 aircraft serving the region, Mr. Gonsalves said the airline now had to do so with a smaller number of aircraft.

“The difference then, compared to now, is that back then you had 37-seaters and 30-seaters and now we have 50-seaters and 70-seaters.   So, even in terms of the carriage load there is not a real difference between what we had before and what we have now.  The fact is, we have fewer aircraft actually moving people, so, therefore, we have to be very prudent as to the routes that we are serving,” he pointed out.

In terms of performance as outlined by LIAT’s management, the Chairman explained that up to August this year there was a $5 million net profit, but it was forecast that the airline would lose EC$ 9.2 million by the end of this year.

“But, this is moving from numbers close to $100 million to $57 million, and even last year, roughly half of the $57 million had to do with loses incurred and selling Dash Eights and paying severance pay,” Dr. Gonsalves explained.

He also outlined that a number of reforms had been implemented, as reported in the press. The Prime Minister pointed out that when he took up his position as leader of St. Vincent back in 2001, LIAT had approximately 1,200 persons employed; now it employed 669 individuals, and the head count in the budget was for 630.

“Therefore, a review is being done at the Board level, as we are looking at the organisational structure to determine what is the optimal number of employees we must have going forward in order to serve the entire network…,” he disclosed.