Prime Minister: Infrastructure Not Up To Mark 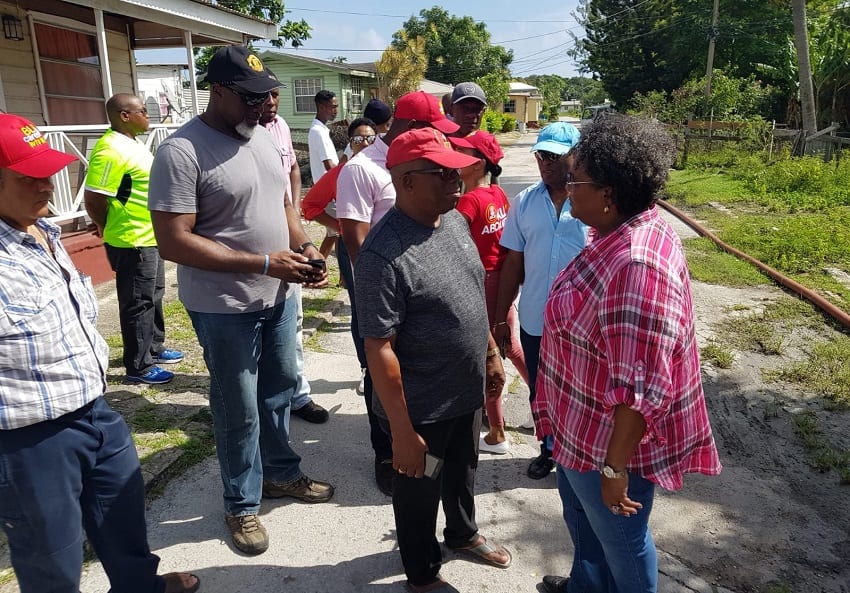 Prime Minister Mia Amor Mottley in discussion with Minister of Environment and National Beautification, Trevor Prescod and government officials during a tour of areas flooded as a result of the passage of Tropical Storm Kirk. (BGIS)

Prime Minister Mia Amor Mottley has described Barbados’ infrastructure as being in a woeful state, and has given the assurance that Government would deal with it.

Ms. Mottley expressed those views on Saturday after touring Chapman Lane and Pondside, The City; Wotton, Christ Church; and Ruby Tenantry Road, St. Philip, which were flooded recently as a result of the passage of tropical storm Kirk.

The Prime Minister told the media after the tour: “We don’t have the money to deal with everything all at once.  But we have prioritized what we need to, and between the various Ministries we are going to go after it systematically.

“We also have some development work that we have to do with respect to loans and that will be critical.  The biggest claim on our public infrastructure is water and sewerage; thereafter it is going to be drainage, [and] roads.  You can’t ignore infrastructure for as long as we have been ignoring it and expect that it is still going to function in the same way.”

Stating that the problems were not insurmountable, she stressed, however, that they could be resolved, as she gave the assurance that they would be dealt with.

“In some instances, there are fixes that can be dealt with immediately by the Ministry of Public Works and the Drainage Division and in other instances, we are going to have to assist those who really have been very badly affected through the government agencies that are set up to do that.

Ms. Mottley disclosed that it was agreed that work would begin next week on deepening and widening the canal at Murphy’s Pasture, The City.  She noted that a lot of roads had been built in Barbados without proper drainage and sufficient attention to gradient, and stressed that this situation must be looked at in the medium to long term.

“In other instances, there have been cases where developments have been done and regrettably houses have been placed in the middle of bottoms…. So we have to pay greater attention to the planning issues, if not we will pay one day,” she said, adding that, from now on, wherever possible, people should not build on marshy land.

The Prime Minister said the Bridgetown Pumping Station had one functional pump and instructions were given two weeks ago that two additional pumps should be procured, so as to ensure there was no flooding in town.

Ms. Mottley stated that she would meet on Monday afternoon to receive formal reports from the various government agencies.

Several Government Ministers and senior public officials were part of the touring party.