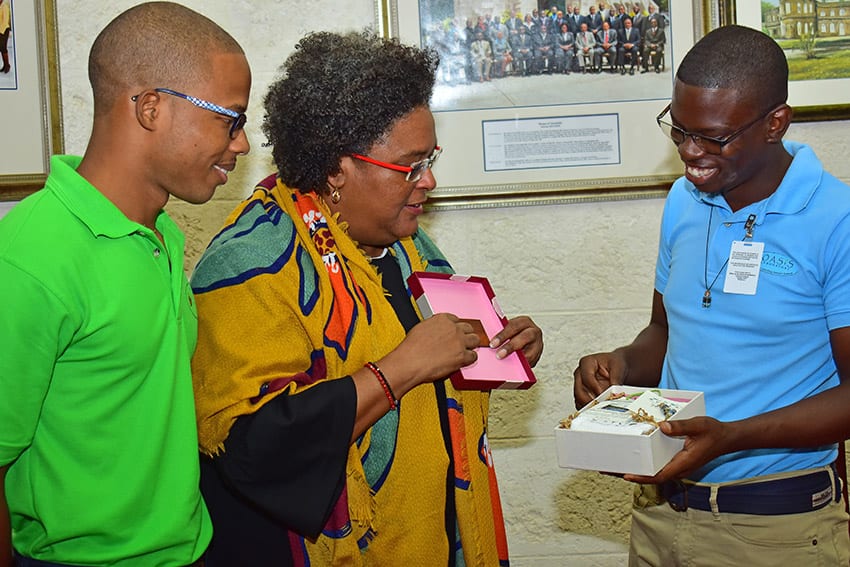 Prime Minister Mia Mottley taking a look at some of the products offered by Oasis Laboratory, with co-founders and chemists, Mikhail Eversley (left) and Kemar Codrington. (C.Pitt/BGIS)

Ms. Mottley expressed this view on Monday when co-founders of Oasis Laboratory and chemists, Mikhail Eversley and Kemar Codrington, as well as their consultant, Anderson Eversley, met with her in the Ermy Bourne Committee Room, at Parliament Building.

The Prime Minister said a number of initiatives were put in place to grow the economy, and suggested that with businesses such as Oasis, transformation and growth would be evident.

After hearing from the young men that their products were being sold in one store and were already in use at a hotel, she encouraged them to expand their base and get their products into major stores. “These products can be given as gifts,” she stated, adding “well done, good stuff”, as she examined one of the packaged soaps.

She added that she would ask the Minister of Maritime Affairs and the Blue Economy, Kirk Humphrey, to meet with the young entrepreneurs, so they could hear how that Ministry was dealing with the harvesting of the Sargassum seaweed.

During the meeting, the entrepreneurs discussed their efforts in the sustainable use of local flora and Sargassum seaweed to create an export base to earn valuable foreign exchange for this country.

Mr. Codrington shared some of their plans and said the response to their products had been “fantastic”.  He pointed out that the toothpowder, which was formulated with charcoal of locally mined calcium carbonate; local minerals and natural plant extracts, would be in the stores shortly.

Mr. Codrington and Mr. Eversley graduated with Bachelor of Science Degrees in Physics from The University of the West Indies, Cave Hill Campus.  Their soaps have been named after popular beaches in Barbados.