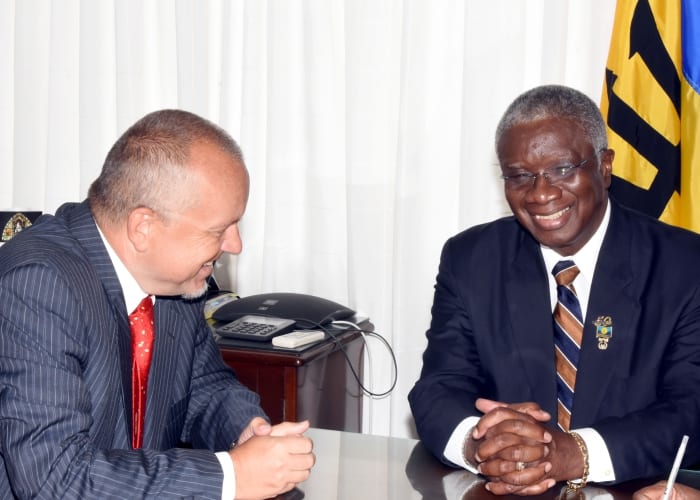 Prime Minister Freundel Stuart and Ambassador Extraordinary and Plenipotentiary of the Czech Republic to Barbados, Vladimír Eisenbruk, sharing a light moment during a recent courtesy call. (A. Gaskin/BGIS)

Prime Minister Freundel Stuart has identified organic farming and health and wellness tourism as possible areas of cooperation for Barbados and the Czech Republic.

Mr. Stuart expressed this view recently when Ambassador Extraordinary and Plenipotentiary of the Czech Republic to Barbados, Vladimír Eisenbruk, paid him a courtesy call at Government Headquarters. Permanent Secretary, Ruth Blackman, was also present during the discussion.

The Prime Minister noted that the Czech Republic was proficient in health and wellness tourism, and since tourism was Barbados’ number one sector, then there was scope to deepen relations in that area. He added that almost 12 per cent of the land there was used for organic farming and stressed that Barbados would be interested in learning from them.

He pointed out that the island was creating a sugar cane industry to optimise the by-products of the sugar cane plant. “The agricultural sector is not contributing as much to the GDP as we would wish but we are working on it,” he stated.

Mr. Stuart said people-to-people contact between both countries should be promoted and suggested that once transportation links were established, then an increase in visitors should follow.

He pointed out that a Double Taxation Agreement had been signed by both countries, which is “pregnant with opportunities for investment”. He reminded the Ambassador that Barbados was a clean, well regulated tax jurisdiction and not a tax haven as was all too frequently claimed by some European countries.

He noted that the country’s international business and financial services sector was put under pressure from time to time, but gave the assurance that Barbados would continue to fight the battle to preserve its reputation.

During the wide-ranging discussions, the Prime Minister said the consumption patterns of Barbadians had changed over the past 50 years and the technocrats were investigating how to use waste to generate energy. “It has become very costly to dispose of the amount of waste we generate and it is a big problem that is engaging the Government’s attention,” he stressed.

Ambassador Eisenbruk stated that the Czech Republic also has experience in the area of renewable energy and could therefore render assistance to Barbados. He expressed optimism that with the necessary air links, more tourists would be willing to visit this beautiful country and enjoy not only its landscape, but the hospitality of its people.