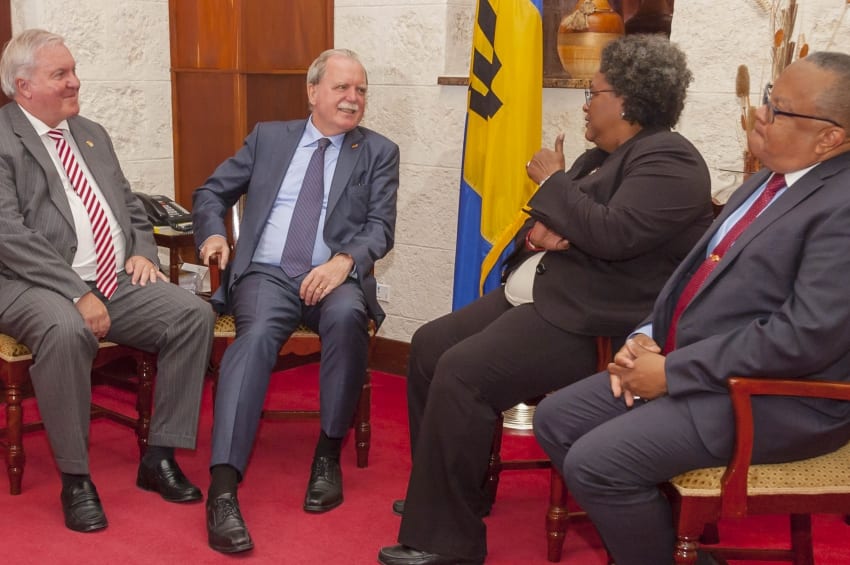 Barbados is desirous of forging deeper ties with Germany. This was the hope conveyed by Prime Minister Mia Amor Mottley during a courtesy call by the new Ambassador of Germany, Mr. Holger Michael.

During the courtesy call which took place in the Committee Room of Parliament last Friday, discussions between the Prime Minister and the German envoy centred on climate change, renewable energy, bilateral relations, tourism, scholarships and training, especially in technical and vocational education.

On the subject of climate change, the Ambassador said his country would be targeting closer cooperation between Barbados and the wider Caribbean region.

In response, Prime Minister Mottley indicated that Barbados was indeed conscious that climate change is among the strategic issues affecting its development and welcomed Germany’s cooperation and advocacy and action on these issues in a very strong way.

Another focal topic during the discussions was that of Barbados being blacklisted as a tax haven.  Ambassador Michael highlighted that it was time to open a constructive dialogue on this topic to which PM Mottley agreed.

“Barbados is not a tax haven, Barbados is a low tax jurisdiction with a series of treaties networks that work for us,… and we have continuously complied with all the requirements necessary and we are prepared to do what we have to do, to restructure our domestic economy,” she stressed, adding Barbados has done everything to meet international business standards and practices.

PM Mottley expressed “we have to learn from you” as Germany is one of the most economically successful and innovative European countries.

Barbados established diplomatic relations with Germany in March 1967. Ambassador Michael is based in Trinidad and Tobago and he presented his credentials to Barbados’ Governor General Dame Sandra Mason on Thursday, July 26.