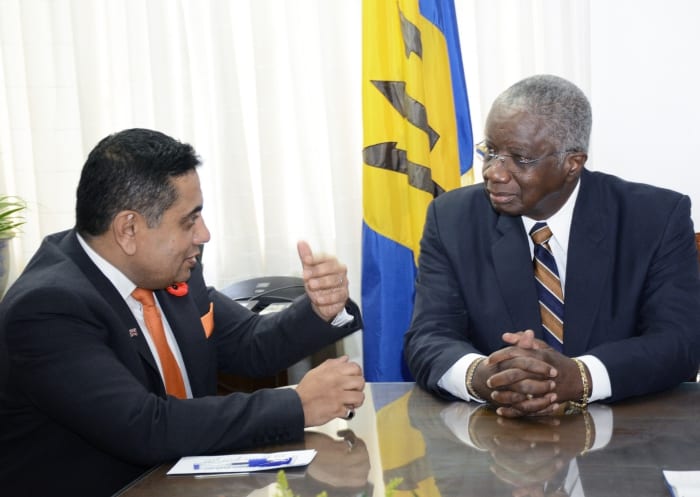 Issues pertaining to the Commonwealth, climate change, and Barbados’ relations with the United Kingdom were among several areas discussed recently, when Lord Ahmad of Wimbledon, the UK’s Minister with responsibility for the Caribbean, paid Prime Minister Freundel Stuart a courtesy call.

Those attending the discussions, which were held at Government Headquarters, included British High Commissioner, Janet Douglas; Director, Americas at the Foreign and Commonwealth Office, Kara Owen; and Permanent Secretary in the Prime Minister’s Office, Margaret Jones.

Prime Minister Stuart said climate change was a critical issue for Small Island Developing States (SIDS). He pointed out that Barbados, like some other SIDS, has been classified internationally as a middle-income country.

He stressed, however, that because of the island’s vulnerability, officials here were fighting a battle to have it reclassified.

“We can be middle-income today and our entire gross domestic product could be wiped out tomorrow because of a natural disaster, so we are arguing for a vulnerability index to be used,” he explained.

He stated that Barbados highly valued its relationship with the UK, and expressed a desire for collaboration between the two countries to continue.

During the wide-ranging discussions, Lord Ahmad said the UK was keen on strengthening its relations beyond the traditional areas with Barbados.

He added that the UK wanted to fortify the work being done at the RSS Fusion Centre, which is an initiative of the Regional Security System (RSS), in collaboration with the Government of the UK.

The Centre brings together law enforcement and other agencies involved in crime and security matters across RSS member states, so that they could share intelligence and capabilities in the fight against organised crime threats.

Lord Ahmad thanked Barbados for the support given to the UK when its overseas territories were affected by the recent hurricanes.

Describing the overall response to the disasters as “incredible”, he said the region was exemplary, and noted that Barbados led from the front.

He added that the recent hurricane activities had provided officials with a huge opportunity to work together to more effectively coordinate their responses.

In response, Prime Minister Stuart stressed that this country attached great importance to disaster preparedness, and extending a helping hand to countries affected by natural disasters.