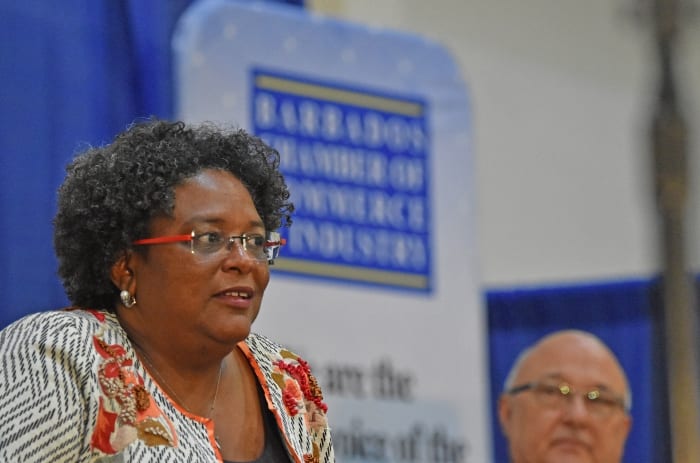 Prime Minister Mia Amor Mottley speaking at the Business Luncheon of the Barbados Chamber of Commerce and Industry, at the Lloyd Erskine Sandiford Centre while BCCI President Edward Clarke looks on. (C.Pitt/BGIS)

Prime Minister Mia Amor Mottley has described her recently delivered Mini-Budget as “not perfect”, but “absolutely necessary to stop the bleeding” in the economy.

Ms. Mottley expressed this view recently while delivering the feature address at the Business Luncheon of the Barbados Chamber of Commerce and Industry, at the Lloyd Erskine Sandiford Centre.

She told the gathering that Government’s mission was far from over and continued cooperation was absolutely essential if they were to get to the necessary point.

“We have put measures in place in the Mini-Budget which are under review. They are not perfect, but what they do is allow Government to be able to close that significant gap, both with respect to its deficit and ultimately to being able to achieve a primary surplus because we have to work ultimately to bring our debt down,” she said.

She highlighted the soon to be introduced Garbage and Sewage Contribution, in which businesses would pay 50 per cent of their water bills.  She noted that currently, all businesses connected to the sewerage systems in Bridgetown and on the South Coast pay two-thirds of their water rate.

The Prime Minister added that Government was aware that there would be some entities in the tourism and farming sectors, hairdressers, a few manufacturers and other categories that might be pushed beyond their limit because they used more water than others.

“We met with the General Manager of the Barbados Water Authority and I have asked that in the same way we are bringing the legislation for the relief committee that will act in the same way that the Land Tax Relief Board does for land tax, that we will also need to see the profiling on those sectors such that we can settle on the appropriate cap that will be applied with respect to the garbage and sewage collection fee.

“I said it to the Barbados Hotel and Tourism Association, I repeat it to you, and once those figures are available we will then be in a position to set the appropriate cap because we, like you, do not want to see people overtaxed or incapable of meeting their commitments,” she stated.

Ms. Mottley said Government understood that if businesses did not have the money to reinvest, then there would be no growth in the economy and no way out of this situation.  She insisted that the spending of households and businesses contributed to growth. 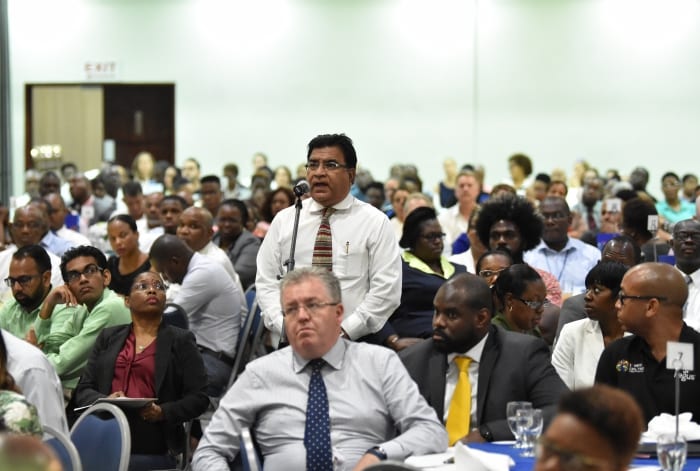 Past President and Chair of the Special Projects Committee, BCCI, Lalu Vaswani, making a comment at the business luncheon. (C.Pitt/BGIS)

She noted that now that phase one of the programme had been completed, Government was now looking at the other segments. “Phase two and three have to be about refocusing and restructuring those entities that we ultimately will agree upon in the next month, but taking the time to do it properly,” she stated.

The Prime Minister pointed out that the restructuring had to be done, whether as partnerships and divestment, workers owning shares, sale of entities, finding a different entity to deliver a particular service or bringing proper management, and getting greater efficiency from an existing entity.

She disclosed that phase two takes place from August 2018 to July next year; phase three from July 2019 to December 2020, and phase four would be the wrap up, from January to June 2021.

“We have to stick to the timelines. The best journey and the most efficient journey is one for which there is a road map, so we need to settle the road map before going forward, but we need to understand that the journey takes time,” she stressed.

Turning her attention to the crime situation, the Prime Minister emphasised that Barbados could not withstand an explosion in gun violence.

She disclosed that she had met recently with the National Security Council, the Attorney General and the Minister of Home Affairs. She said Government’s role was to ensure that resources and cooperation were given and the officials were of the view that some things had to be done.

“In the budget, we spoke about the need to reduce the backlog and we made resources available, which will be operational, I am told, by September, even in the absence of a functioning court space in the main court building as that is repaired,” she told the gathering.

Ms. Mottley again pointed out that Barbados had a backlog of about 10,000 court cases, which could not be dealt with at once. “But what we can treat to is all our murder cases and all the cases of shooting with intent and then come down the hierarchy with robbery, rape and burglary.

“We have committed to that and… to having every case from July 1 last year heard expeditiously; and then having every new case heard within six to nine months in this country, in those four or five categories that I just referred to. People will not play with you if they know they are going to face sanctions quickly and urgently,” she contended.