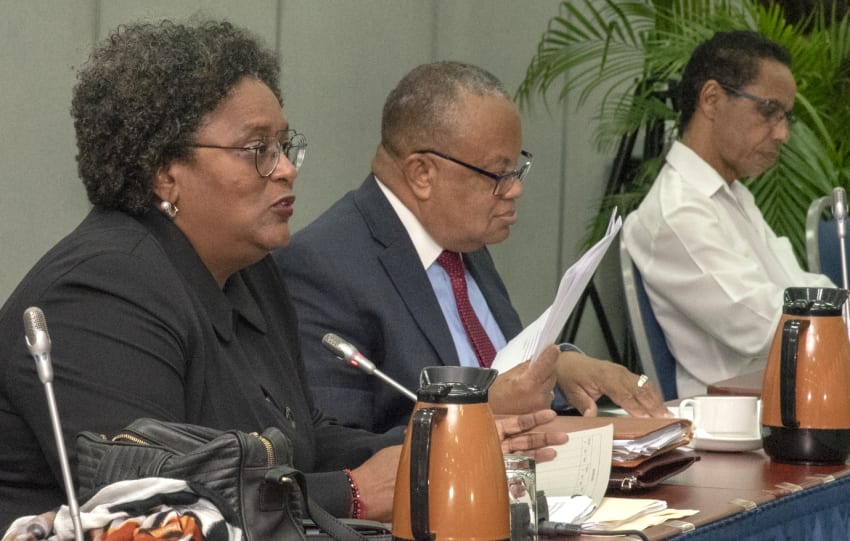 The Government of Barbados is continuing to work with the CARICOM Secretariat to ensure that this country fulfills its obligations under the CARICOM Single Market and Economy (CSME).

This was underscored today as Prime Minister Mia Amor Mottley and several members of Cabinet, met with CARICOM Secretary-General, Ambassador Irwin LaRocque and his team at the Lloyd Erskine Sandiford Centre.

Prime Minister Mottley pointed out that CARICOM leaders were “hopeful that we can see some real progress in the region”, noting that Caribbean people needed to hear their leaders talk about issues that were important to them, and “in meaningful ways that they can understand”.

She expressed the hope that in future, CARICOM plenary sessions could be live streamed throughout the region so that Caribbean people could be privy to the discussions.

In response, Ambassador LaRocque thanked Ms. Mottley for the leadership she demonstrated at the recently held CARICOM Conference in Jamaica, saying that it was “much appreciated and had led to a renewed sense of vigour at the Secretariat”.

The high-level meeting was designed to map out agenda items that will be discussed at the upcoming meetings of the Council for Finance and Planning, and the Prime Ministerial Sub-Committee on the CSME, which will be held in Barbados in September 2018. A Special Meeting of the Conference on the CSME takes place in Trinidad in November.

Prime Minister Mottley has lead responsibility for the CSME and will meet on a monthly basis with the CARICOM Secretariat to advance the régime.