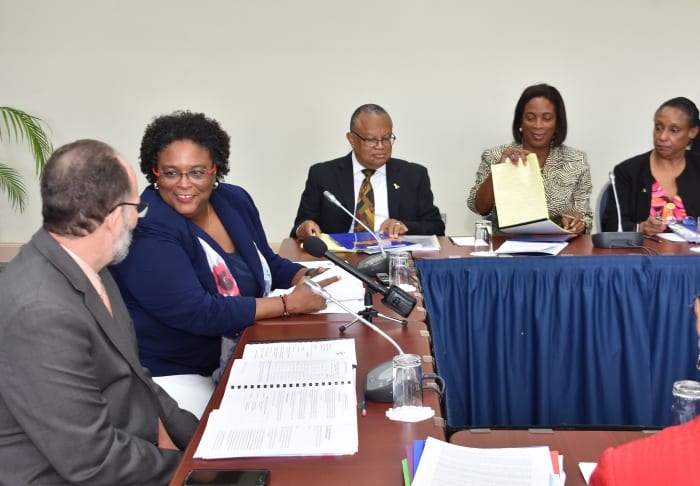 Prime Minister Mia Amor Mottley has been warmly welcomed to the CARICOM fraternity.

The greetings came from Secretary General of the Caribbean Community, Ambassador Irwin LaRocque, when he met with Ms. Mottley on Friday at the Lloyd Erskine Sandiford Centre, to update her as lead Head of the CARICOM Single Market and Economy, and to discuss key agenda items for the upcoming Heads of Government Conference in Jamaica.

Congratulating the Prime Minister on her “resounding victory” at the May 24 General Election, Ambassador LaRocque told Ms. Mottley that the region was at a very important juncture in its history and said that he was “looking forward to working with her very closely to furthering the regional agenda”.

In response, Prime Minister Mottley thanked the CARICOM Secretary General for his warm welcome and added that the Caribbean needed to be more competitive and to have strong regional jurisdictions if it was to secure prosperity, stressing that functional cooperation was important to achieving these developmental goals.

She noted that progress in the Caribbean was often constrained by the confines of regional space and promised that Barbados would continue to pursue regional integration and to advance the cause of the people of the Community.

Discussion also focused on having a Single Domestic Space, Contingent Rights, the Caribbean Court of Justice, Cross Border Relations, Regional Transportation and Telecommunications, Public Procurement, and Issues of Small States, among other items.

As a newly-elected Head of Government, Prime Minister Mottley will deliver a keynote address at next month’s 39th Regular Meeting of the Conference of Heads of Government of the Caribbean Community, which gets under way in Montego Bay from July 4 to 6.