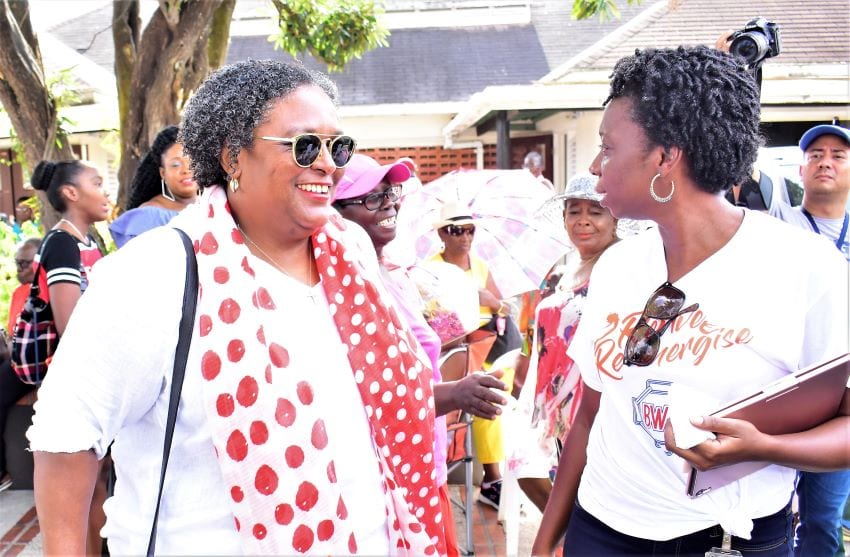 Papers have been developed on the structure of work in Barbados in the private and public sectors, and on pensions.

This disclosure came from Prime Minister Mia Amor Mottley, who said two sub-committees of the Social Partnership had been mandated to develop the papers.

According to her, the preliminary papers had been submitted to the Social Partnership and they were currently being strengthened in certain areas.

Ms. Mottley made the comments on Wednesday afternoon, as she addressed the Barbados Workers’ Union’s May Day Celebrations, the first time as Prime Minister, on the grounds of Solidarity House.

The Prime Minister told her audience: “Unless we get this issue of pensions right, we stand to not only affect workers, but affect the capacity of the state to sustain what its obligations are to your young children as they become older, and we don’t intend for them to be put at risk in this country.

“So, over the course of the next 12 months, my government will work with the social partners to settle on the appropriate…legislation to deal with the structure of work.  Some of you should not have to say that you want a sick day or a vacation day to do something that is family driven. You should be able to have lieu days and…up to five lieu days in this country because as human beings, we all have obligations to ourselves and our family that go beyond sickness.”

During her wide-ranging speech, Ms. Mottley said the ability to speak honestly, truthfully but respectfully must always be the hallmark of the Social Partnership.  She underscored the importance of working together and stressed that government would never resile from such collaboration.

“I have come here…to defend the social partners because it seems for some, patriotism is now to be abused,” she told the gathering.

The Prime Minister stressed that the Barbados Economic Recovery and Transformation (BERT) Programme was not an IMF programme, but it was best suited for the people of Barbados.

Stating that all the workers could not be absolved from pain because the debt to which the country had sunk was very deep, she stressed that government sought to minimize the discomfort so they could recover quickly.

“We determined that this adjustment this time had to be borne, not just by the workers, but by others who were as much a part of the crisis being created as anybody else,” she insisted.