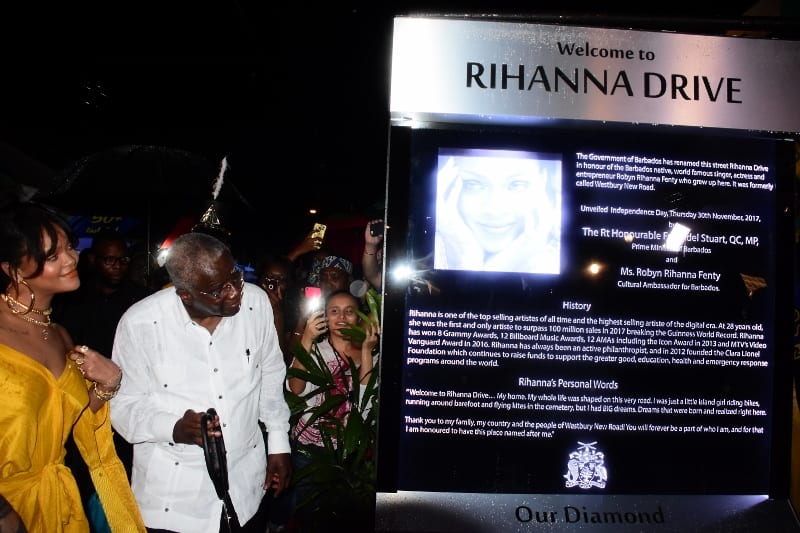 Prime Minister Freundel Stuart yesterday described superstar Rihanna as “the most successful and multifaceted entertainer in the history of Barbados”.

Speaking at a ceremony to change the name of Westbury New Road, where the singer/songwriter grew up, to Rihanna Drive, the Prime Minister noted: “Her story is one to inspire other young people, in Barbados and beyond, to know that the world is their oyster, and to understand that talent by itself is not enough without hard work, sacrifice, discipline, good organisation and the ability to network.”

He said that with her unique creativity, originality and versatility, Rihanna had transformed herself into one of the most iconic personalities of the 21st century. “On this tremendous journey, she has developed into an actress, dancer, model, songwriter, exponent of several genres of music, philanthropist, designer, entrepreneur, music producer and multiple Grammy winner.”

Prime Minister Stuart said that yesterday’s ceremony represented Government’s commitment to dispel the notion that “a prophet is not without honour save in his own country”. “In independent, modern Barbados, we must not allow ourselves to fall into this trap. In particular, we must not forget our people located in the Diaspora, many of whom have registered outstanding achievements.”

He told the residents of the newly-named Rihanna Drive that there was no reason why their neighbourhood could not be a bastion of community tourism in Barbados. “There are already reports of tourists curious to see and record where Rihanna lived. Taxi drivers and tour guides will be able to proudly point out the house where Rihanna grew up and to show them the plaque which will be unveiled today.”

Rihanna was conferred with the title of Cultural Ambassador of Barbados during the ceremony.