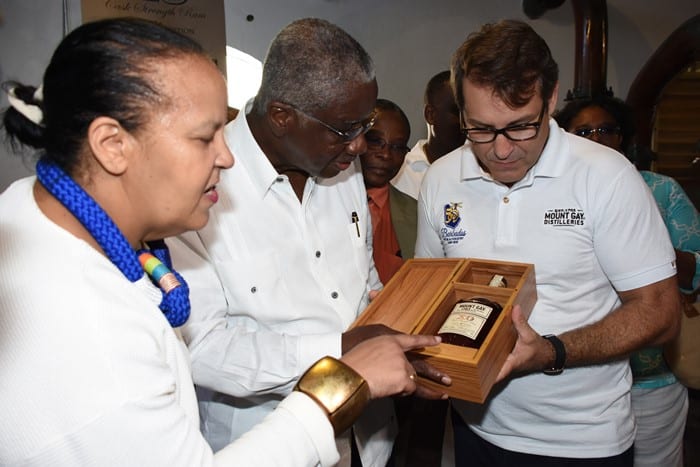 Prime Minister Freundel Stuart has expressed concern that the competitiveness of locally produced rum in international markets has been challenged considerably in recent times.

Mr. Stuart made the comments over the weekend at the launch of Mount Gay’s Commemorative 50th Anniversary XO Cask Strength Limited Edition at the St. Lucy Distillery.

The Prime Minister said producers were forced to compete with heavily subsidised spirits produced in Puerto Rico and the US Virgin Islands, through the United States “Cover Over grant”.

“While the granting of this subsidy has adversely affected Barbados’ rum industry and has contributed to the decline in the export of rum to these USA territories, this industry is determined to show its ability to adapt and maintain its place in the markets of the world…. We have proven that we are competitive when the playing field is level,” he stressed.

He pointed out that investment was required to implement a sustained and integrated local, regional and international marketing campaign for the rum industry.

Mr. Stuart noted that over the years, the export market for the trading of rum and the remittances from sales had been among the chief drivers of the economy.

“The rum industry has been acclaimed as one of the most successful industries in the Caribbean and more so in Barbados, with our three centuries of experience. Mount Gay Distilleries has … exported, on average, more than BDS$30 million in rum annually over the past five years.

Prime Minister Stuart indicated that Barbados was still experiencing challenges in sourcing molasses from the local sugar industry. He added that there were ongoing discussions with the Ministry of Agriculture, the Ministry of Industry, sugar producers and rum producers to ensure adequate supply for the rum industry.

“The aim of the dialogue is to arrive at a formula for the production of molasses which would satisfy all parties involved, and would ultimately result in the increase and sustainability of the local production of this much needed input,” he explained.

Forty-four blends from the finest single and double distilled rums from Mount Gay’s oldest reserves were selected to reach the final blend for the XO Cask Strength Limited Edition.