Prime Minister Freundel Stuart poses with Scarlet Moradians who is on her 135th visit to Barbados. (A.Miller/BGIS)

Mr. Stuart’s commendation came last evening as he hosted the third Repeat Visitors’ Reception for the year, at Ilaro Court.

The Prime Minister told his audience: “The marketing arm [BTMI] has hit the ground running and has been doing a very good job of marketing Barbados. But we are aware that even when we market Barbados effectively, that there is scope for a fatigue factor, even in tourism, if when people come to the country they see the same things … and have to go through the same routine all the time.

“The Barbados Tourism Product Authority was created … to diversify our product offerings. The BTPA has been doing its part as well and I want to commend them for the stellar work which they have been doing in contributing to the solidification of our tourism sector.”

Mr. Stuart added that the hoteliers had been doing a very good job and expressed the view that the relationship between the Barbados Hotel and Tourism Association and Government was a “very healthy and good one”. He opined that that healthy relationship was making its own contribution to the smooth functioning of the sector.

He underscored the importance of hosting the repeat receptions for visitors, stating that it was Barbados’ way of saying thanks to them for their “unflinching” efforts in making the tourism sector thrive. 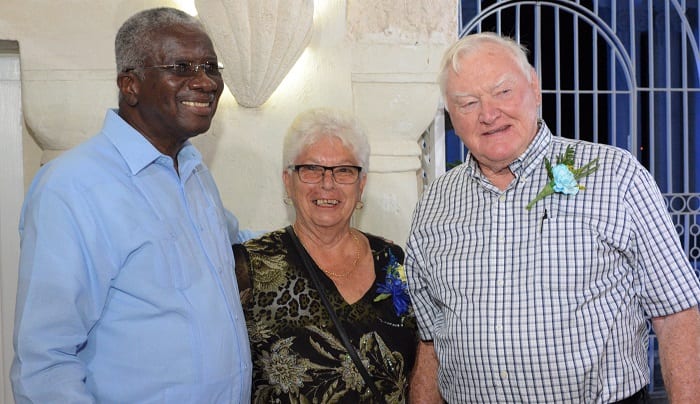 Prime Minister Freundel Stuart takes a photograph with Joan and John Buchanan who have a century of visits to Barbados. (A.Miller/BGIS)

Mr. Stuart pointed out that it was the tourism earnings that paid most of this country’s bills. “Therefore, we have a vested interest in ensuring that people visit this country and continue to visit it, since we want to make sure that we always have a solid tourism sector,” he stressed.

During the night, five persons who visited Barbados 457 times were recognised, with Scarlet Moradians, on her 135th visit, being presented with a plaque.

The others who visited regularly are: Paul Harmeier, who is on his 60th visit; Don Cliff, who has been here 79 times; Norman and Susan Bridges, who visited 83 times; and John and Joan Buchanan, who chalked up 100 visits.