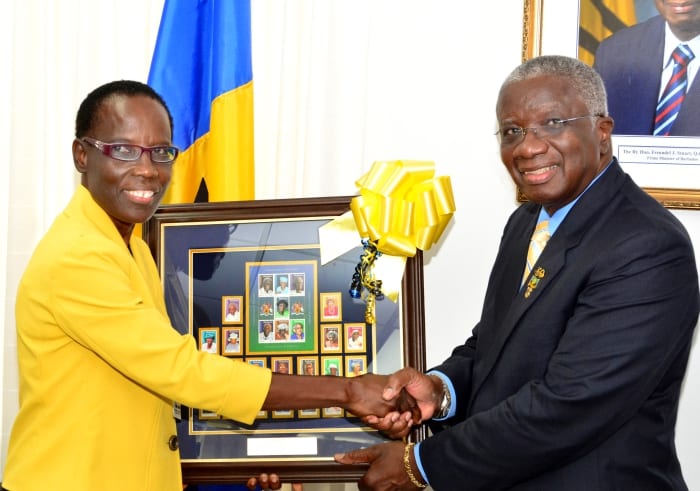 Mrs. Ashby explained that the Golden Jubilee commemorative stamp issue pays tribute to Barbados by highlighting its growth and development in the key sectors of education, tourism, agriculture, manufacturing, transportation and sports over the 50 years of Independence.

Centenarians of Barbados honours men and women, from every parish and all strata of society. Barbados is recorded as having the second highest percentage of centenarians in the world, proportionally, behind Okinawa, Japan.  In 2016, that number stood at 114 – 103 women and 11 men.

The Post Master General described Barbados’ stamps as “silent ambassadors”, noting that they were highly sought after on the international market.

She said: “They provide a visual snapshot of our history and enhance the country’s visibility internationally, as they contribute to the daily flow of tourists to our shores. This is attested to by visitors calling at the Philatelic Bureau and revealing that their interest in visiting Barbados was heightened through our stamp productions.”

Prime Minister Stuart thanked the Postal Service for the gifts, revealing that he had an interest in stamp collecting.  This had been awakened during his stint as Minister of Home Affairs, which included responsibility for the Postal Service.

He congratulated the department on “the excellent work” they were doing, while acknowledging the challenges posed by technological changes.

He stated: “I know technological changes are putting pressure on the postal business, as people text and Whatsapp rather than write letters. It is an old business, which will survive by adapting.

“The Barbados Postal Service is doing a great job adapting to new circumstances and I think that the human capital and resources that it has been able to attract over the years are the best guarantee of its continued survival.”