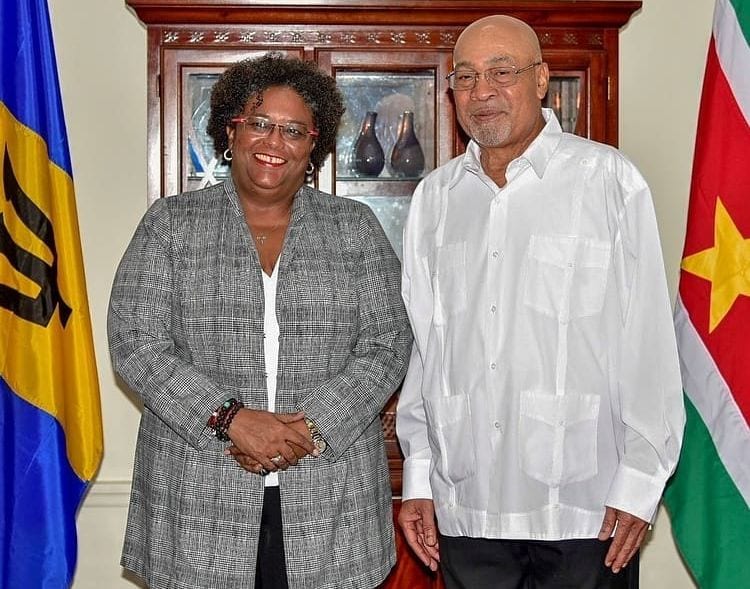 Barbados’ Prime Minister Mia Amor Mottley poses for an official photograph with Suriname’s President, Desire Delano Bouterse, during an official visit to that nation from November 14 to 16. (GP)

Prime Minister Mia Amor Mottley has called on those persons involved in regional institutions to embrace the use of technology to facilitate business.

According to her, utilizing technology would save time and operating expenses as well as improve operational efficiency.

Ms. Mottley made the comments last Thursday during a visit to the CARICOM Competition Commission in Suriname, where its Chairman, Justice Christopher Blackman, a distinguished Barbadian and Caribbean Jurist, welcomed her to the Commission.

The Prime Minister told Justice Blackman and senior staff: “There are all kinds of mechanisms now, such as Zoom and Skype, that have made video conferencing as regular as a phone call. In that context, therefore, I really do believe that we need to stop talking about it and that we have come to the time where we need to put it to work for us”.

Ms. Mottley said that having chaired the Preparatory Committee for the Caribbean Court of Justice, it was apparent that the mechanism used to facilitate that Court’s utility to each country ought to be the mechanism used now in the context of the difficult fiscal circumstances being faced by regional countries.

“Rather than try to create every single institution on our own and not do it well because of the difficult fiscal circumstances, we ought to ensure that we vest strong regional institutions with national and regional jurisdictions. It is what will make the difference,” she suggested.

The CARICOM Competition Commission was established by Article 171 of the Revised Treaty of Chaguaramas and is one of the key institutions in support of the CARICOM Single Market and Economy.

At its Tenth Special Meeting held in Port of Spain in November 2004, the Heads of Government took a decision that the Commission would be headquartered in Suriname, and four years later, the Commission was inaugurated on January 18, 2008.