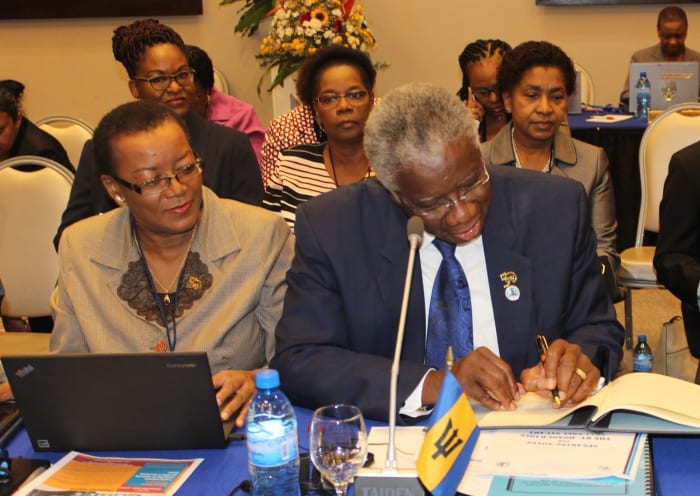 Prime Minister Freundel Stuart signed two CARICOM Agreements today, in the margins of the Twenty-Ninth Inter-sessional Meeting of the Conference of Heads of Government of CARICOM in Port-au-Prince.

They are the CARICOM Arrest Warrant Treaty (CAWT) and the Revised Agreement Establishing the Caribbean Examinations Council (CXC). Barbados was among several countries to sign the treaties as part of its obligations as a member state of CARICOM.

The revised CAWT is aimed at simplifying the process of surrender of fugitives from one Participating Member State to another for the purposes of criminal prosecution. It will also enable the serving of custodial sentences where the requested person has fled from justice after being convicted or sentenced for an applicable offence.

The Revised Agreement Establishing the Caribbean Examinations Council was reviewed by the LAC in 2014, 2015, 2016 and 2017.  It redefines the duties and strengthens the powers of the CXC.  In addition, the Agreement contains provisions on associate membership, the security of examinations, privileges and immunities, and dispute settlement.

In 2012, the CXC undertook a review of the existing Agreement Establishing the CXC in the context of its expanding operations. The process culminated in the drafting of the Revised CXC Agreement.  In 2013, CXC requested that the revision of the CXC Agreement be submitted for the attention of the Conference.

The status of the Revised Agreement was considered by the Conference at its Thirty-Fourth Regular Meeting in Trinidad and Tobago in July 2013, in the larger context of Human Resource Development.  The Conference “agreed to undertake, as a matter of urgency, the necessary consultations at the national level, to facilitate review and approval of the Revised Caribbean Examinations Council (CXC) Agreement by the [Legal Affairs Committee] for submission to the Conference…”.

The Twenty-Ninth Inter-sessional Meeting of the Conference of Heads of Government of the Caribbean Community will culminate today at the Marriott Hotel.