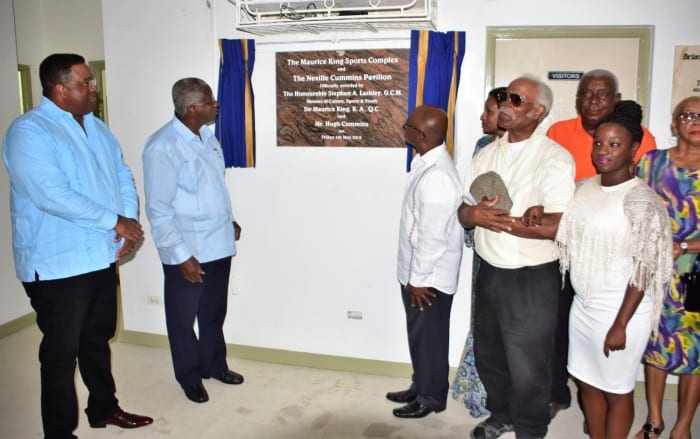 Government is in the process of taking a number of steps to propel sports in Barbados.

This disclosure came from Prime Minister Freundel Stuart, who described sports as a “new economic frontier” while delivering the feature address at the official naming ceremony of the Briar Hall Recreational Facility in Christ Church, last Friday night. The new name is the Maurice King Sports Complex and the Neville Cummins Pavilion.

Mr. Stuart told his audience: “Efforts have continued to be made, among other things, to promote sports as a career choice for our young people. With the institutional reform under way in sports management and governance, with the development of road tennis, the planned initiatives in sports tourism, sports education and training, we are laying the foundation to build the sporting sector and expand its contribution to the socio-economic development of Barbados.”

He noted that sports had become a strategic factor in nation-building, explaining that it played a significant role in battling the tide of chronic non-communicable diseases, such as heart disease and diabetes.

“These diseases afflict a steadily increasing number of Barbadians and is taking a toll on families, societies, and undeniably on the public purse, through the pressure placed on the resources of the Queen Elizabeth Hospital.

“In this regard, the Ministry of Health is working to integrate prevention and control of chronic non-communicable diseases into the health care system and among the strategies being pursued is the deployment of a number of sporting facilities to encourage daily exercise as a routine but simple task to help improve the health of Barbadians,” the Prime Minister stated.

Mr. Stuart said it was fitting for the complex to bear the name of Sir Maurice King, who was elected as the Parliamentary Representative for the constituency of Christ Church West Central from 1981 to 1994; served as Attorney General from 1986; and received the island’s highest award, Knight of St. Andrew, in Barbados’ 2009 Independence Day Honours.

“His love for the people of Barbados generally, his affection for the residents of this constituency and his contribution to the development of this sports facility are without doubt worthy of recognition,” he stated.

The Prime Minister added that while Sir Maurice was behind the acquisition of the property, the late Neville Cummins lobbied tirelessly to promote the idea of a permanent playing field for the Maxwell Sports Club, which was birthed in this community.

“Mr. Cummins was an important contributor to nation-building and to the social development of Barbados as a whole. His advocating for a facility for the residents of Briar Hall and the surrounding districts is what moved us to honour him…,” he explained.

During his address, Mr. Stuart commended Minister of Culture, Sports and Youth, Stephen Lashley, and his staff for the excellent work being done with respect to the development of sports in Barbados. He also thanked the management and staff of the National Sports Council for the dedicated work in maintaining over 70 pavilions and 105 playing fields across the island.