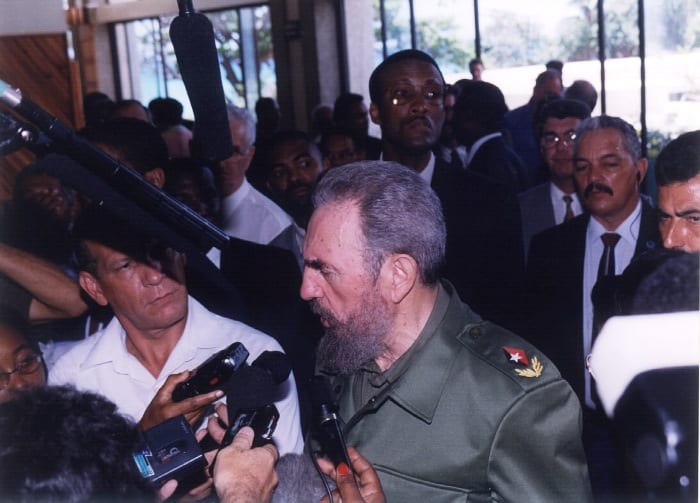 The then President of Cuba, Fidel Castro, speaking to members of the media while on an official visit to Barbados in 1998. Mr. Castro passed away on Friday, November 25, 2016, at age 90 years. (FP)

Prime Minister Freundel Stuart has extended condolences to the Government and people of the Republic of Cuba following the passing of that country’s former President, Fidel Castro yesterday.

The text of the message reads:

“The death of the former President of the Republic of Cuba marks the passing of an indomitable figure who changed the course of history in his country and the region. Fidel Castro Ruz represents as few others do, a symbol of anti-imperialism and continuous struggle for independence.

He inspired many revolutionaries around the world to fight for their ideals. His support for the anti-apartheid struggle is a dimension of his legacy that will not be forgotten.

In the context of bilateral relations, Barbados recalls Mr. Castro’s efforts to promote cooperation in health and education. We value the opportunities that were created for many Barbadians to have their eyesight restored or to pursue post-secondary studies in a wide range of areas.

We recall his defence of environmental security, a principle that we share. Our relationship with Mr. Castro demonstrated that differences in ideology do not have to impede fruitful and constructive relations. He has never forgotten Barbados for the role that it played in ending Cuba’s isolation in this hemisphere.

He was also deeply moved by the action of the Government of Barbados in erecting a monument to memorialise the citizens of Cuba and other countries who perished on Cubana Flight 455 on October 6, 1976.