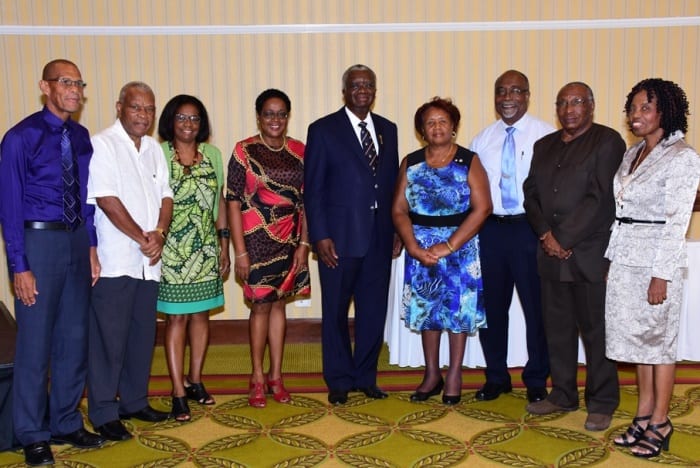 This island’s public service has again come in for high praise from Prime Minister Freundel Stuart.

His commendation came recently at a luncheon at the Barbados Hilton Resort, in honour of Members of the Committee of Permanent Secretaries and Officers of Related Grades, who retired in 2015 and 2016.

Mr. Stuart told the retirees and their colleagues: “It is a source of great irritation for me when I hear the public service being reviled by people who know very little about it…. They take a very broad brush and paint the public service in accordance with their built-in biases.

“My experience has been quite different and I know that Barbados has today, and continues to have, as it has had ever since Independence, one of the best, if not the best, public services in the entire English-speaking Caribbean.”

The Prime Minister expressed the view that one of the reasons why Barbados’ development had been “as spectacular and as stable” as it had been over the last 50 years, was because of the quality of its public service.

“The commitment upon which we have been able to rely; the high intelligence of our public officers, all of these have contributed to our success as a nation. Therefore, it would be churlish of me were I to let slip, on this occasion, the opportunity to thank all of you, those who have retired and those who are still with us, for the massive and substantial, the wise and the insightful contribution which you have made to the development of Barbados over the last 50 years,” Mr. Stuart stated.

He pointed out that it was not an easy period immediately after Independence, since the transition to independence meant a new type of public service had to be created.

The Prime Minister explained that most post-independence leaders looked to the public service to accelerate their programmes to transform their societies into genuinely independent nations.

“Sometimes, because of the fact that old habits die hard, there were symptoms of impatience manifested by the political directorate,” he stated.

However, the Prime Minister pointed out that those public servants kept the faith and did not allow themselves to be overwhelmed, but they steadily and conscientiously stuck to the task, quietly effecting that changeover.

Mr. Stuart congratulated the retirees and thanked them for their service to Barbados and their contribution to its development.