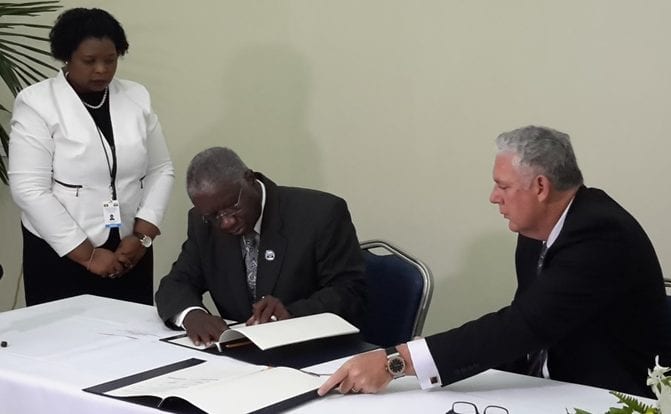 The signing was completed in the margins of the Thirty-eighth Regular Meeting of the Conference of Heads of Government of the Caribbean Community (CARICOM), now wrapping up in St. George’s, Grenada.

In a statement following the ceremony, Mr. Stuart heralded the signing as an occasion that demonstrated “the commitment to foster closer regional integration and closer cooperation that is still alive with the regional grouping”.

He added: “The twin issues of ocean governance and the blue economy are becoming increasingly topical. Part and parcel of both endeavours is the ability of a state to exercise jurisdiction unimpeded over the ocean space appertaining to it. …To be able to agree with one’s neighbours exactly where their jurisdiction begins and yours ends, and vice versa, is thus a matter of the highest import to the proper conduct of the business of the state.”

He lauded the alacrity with which both countries came to the agreement, noting that it spoke volumes about the “breadth, the depth and the tenor of regional cooperation and the spirit of unity that have traditionally characterised CARICOM interstate relations”.

Mr. Stuart reminded persons that CARICOM Members States not only exist in close proximity to each other, but also share a history and cultural identity that will facilitate “an enduring bond of kinship among our peoples”.