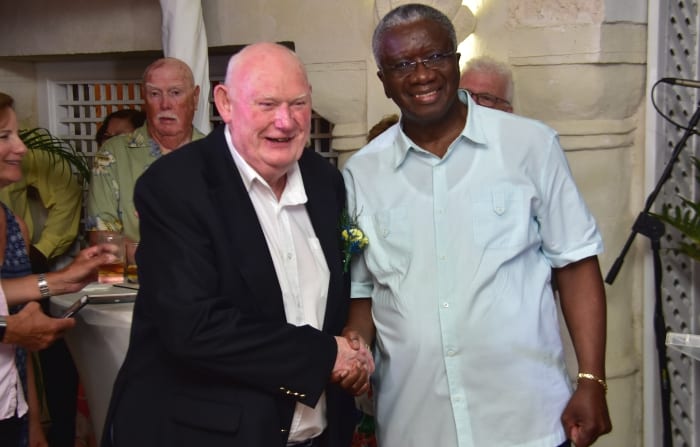 Prime Minister Freundel Stuart poses for a photograph with Richard Gardiner at the Repeat Visitors’ Reception at Ilaro Court on Wednesday evening. Mr. Gardiner is on his 100th visit to Barbados. (C.Pitt/BGIS)

Prime Minister Freundel Stuart took time last evening to say “thank you” to some of the visitors who have invested heavily in Barbados by returning to the country several times yearly.

Mr. Stuart expressed Government’s gratitude during the second Repeat Visitors’ Reception for 2018, at Ilaro Court, at which four persons who visited Barbados over 295 times were singled out and saluted.

They were United Kingdom national, Richard Gardiner, who was on his 100th visit; Teresa Joy-Gallant, who visited 80 times; Patti Austin, who chalked up 75 visits; and former BBC journalist/author and sailor, Jimmy Cornell, who came over 40 times.

The Prime Minister told the gathering: “Your coming here is an affirmation of your confidence in our country … and it would be churlish if I did not say thanks to you for the confidence you continue to show in our country.”

Stating that people were living in very challenging times all across the western world, he said it was necessary for them to carve out for themselves a haven. “Barbados provides that little oasis to which you can repair when life gets a little difficult,” he suggested.

Mr. Stuart said that as early as the 17th century, Barbados was described as a welcoming society and it had continued in that historical tradition, even building on it. “We are satisfied that our building [on that tradition] has not been in vain because with every passing year, we are able to attract more and more people to this country,” he stressed.