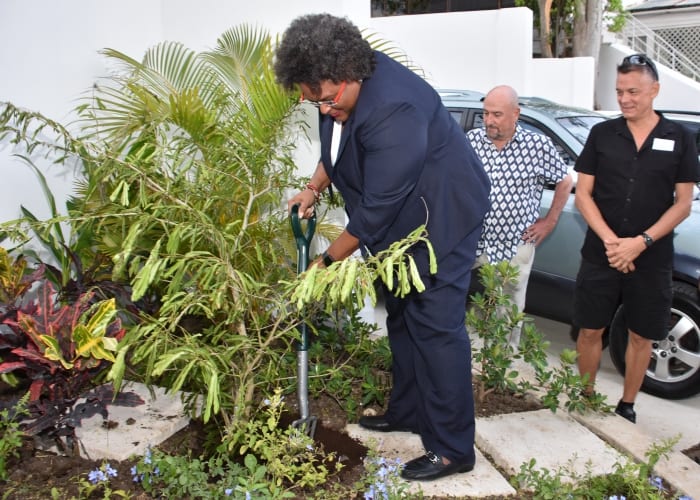 Prime Minister Mia Amor Mottley has announced that she will be meeting with the developers of every major development in Barbados, including the Hyatt Project, over the next week.

The purpose of the meetings, she disclosed, was to get a clear understanding of where the projects were; to identify any obstacles in their way; and to establish the things that needed to be addressed in order to facilitate the kind of growth necessary to propel the Barbados economy.

Noting that some conversations would be easy and others more difficult, the Prime Minister said no-one would be excluded. “We’re going to address all the issues because Barbados must be a place where development can take place but at the same time the rules of fairness and transparency will be respected.”

Speaking last Thursday evening at a ceremony to announce the Harmony Hall Green condominium project at St. Lawrence, Christ Church, Ms. Mottley stressed the need for the laws related to development in Barbados to be brought into the 21st century.

She said she had mandated a review of legislation related to town and country planning as well as water zoning.

“We have to determine whether the same rules that apply to large investors ought to be the same rules that apply to a single dwelling house. We are going to have discussions as to whether we can continue to build flat roof houses, knowing that they are going to be the most vulnerable in a hurricane or whether we must not return to houses with gable roofs and hip roofs to be able to withstand hurricane and high gale force winds.”

Another important discussion, she said, would surround the height of buildings along the coast, as well as in and outside of Bridgetown. The Prime Minister stressed that this type of discussion and consultation, which would take place over the next six to eight weeks, was necessary to avoid ad hoc decision-making.

She encouraged the Barbadian public to become involved in the discussions, which will also be streamed on social media. “I think Barbadians have a right to hear those discussions that will be taking place between the public planners, the private planners, allied stakeholders in the construction industry and of course, ordinary Barbadians who are the persons who have to use the system,” she maintained.

She also addressed the issue of water zoning, noting that the current regulations were “a remnant of the 1960s”.

Ms. Mottley informed that while the Cabinet of that time had determined how land would be zoned for development based on the potential for biological contamination of water, no consideration was given in those days to chemical contamination. Therefore, what was currently in place, she said, was a system that did not take into account environmental, engineering and technological developments over the last 50 years.

As a result, she stated, Barbados’ development since that time has been premised on “things that may no longer be relevant, or, if relevant, may be capable of resolution because of technological and engineering developments”.

The Prime Minister said that a Cabinet paper was prepared in 2007 to deal with this issue and 11 years later the matter remained unresolved.