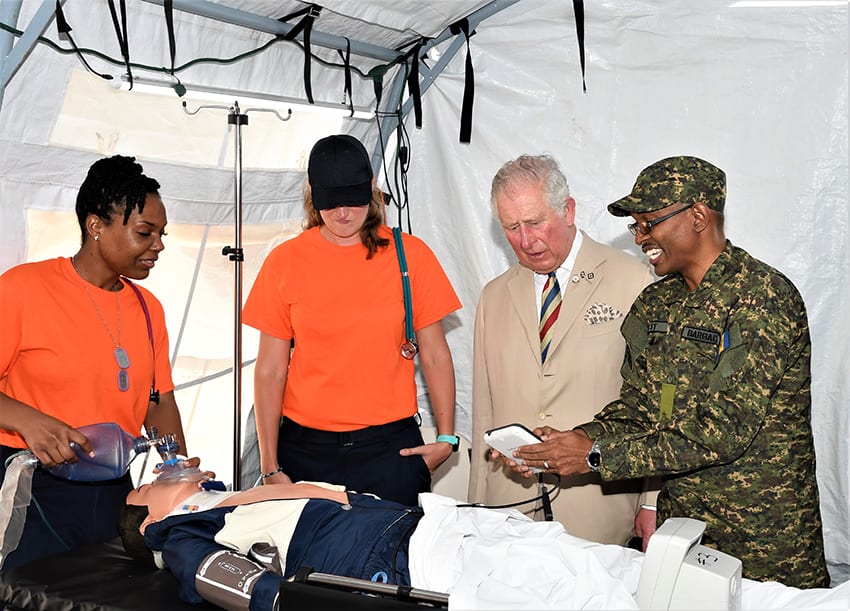 Chief Medical Officer Major Dr. Rene Best giving His Royal Highness The Prince of Wales a demonstration of the work carried out in the field medical facility, with assistance from two volunteers. (BGIS)

The Barbados Defence Force’s (BDF) Field Medical Facility came in for high praise from the Prince of Wales, during a tour of the facility at the Garrison on Tuesday.

Flanked by Chief of Staff of the BDF, Colonel Glynne Grannum, and the Chief Medical Officer of the BDF, Major Dr. Rene Best, Prince Charles was briefed about the facility, and received demonstrations from volunteer doctors, nurses and technicians on how patient care would be executed.

He also viewed the triage, treatment and shock rooms, the pharmacy and logistics area which dealt with waste water, and electricity supplies.

The Prince engaged with some of the 140 volunteers attached to the facility and chatted briefly with them on their various roles in making it a success.

He also indicated that it was a good initiative, and urged those responsible to continue developing the facility to reach higher standards.

She said the present BDF facility was working towards being certified as a Type One facility, which was equivalent to providing care on par with that offered in a polyclinic setting.

Noting that this goal should be achieved by July this year, Colonel (Retired) Gittens said the overall goal was to move towards a Type Two facility, which would then be able to offer care comparable to that given by the Queen Elizabeth Hospital.

That type of facility, she said, would have x-ray machines, ultra sound equipment, a lab, blood bank and an operating room.

“We have spent nearly $2 million to get where we are now.  We want to get to a level two, but we need volunteers such as doctors, nurses, nursing assistants…everything a hospital has, we need,” she said, noting that a move to a level two facility would require an additional $3 to $4 million.