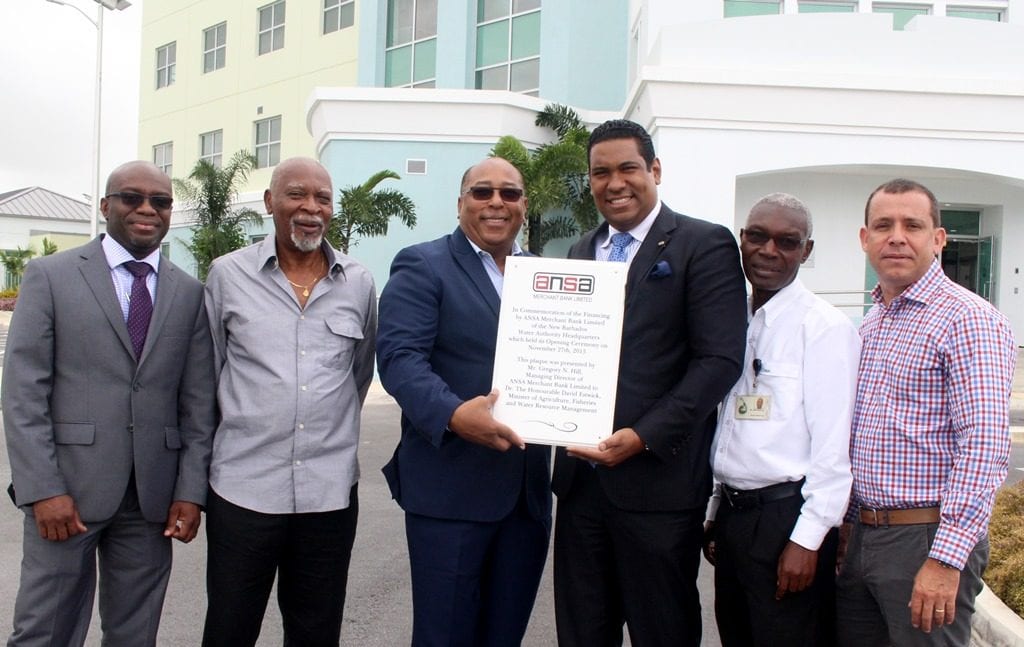 Private public partnerships are being flagged as a model, proved to be workable, for the smooth implementation of projects.

This has come from Minister of Agriculture, Dr. David Estwick who singled out the contribution of Ansa Merchant Bank Limited in helping to bring the recently built Barbados Water Authority (BWA) to fruition.

He made these comments this morning when presented with a plaque from Ansa Merchant Bank Limited’s Managing Director, Gregory Hill for their team effort in the building of the BWA in the Pine, St. Michael.

Noting that there were many statements to the effect that the building would not be built, the Minister explained that it came to fruition as a result of a private public partnership (PPP) arrangement, which was established in England as one of the premiere PPP arrangements, also known as Her Majesty’s Treasury, version four PPP.

Stating that if he were a “doubting Thomas,” or a “person lacking in confidence,” in the negotiating process, they would not have got to this stage, Mr. Estwick stressed that because it was new to Barbados, there were some who thought it could not be applied here.

“…I am happy, however, that Ansa Merchant Bank did not take that approach. And, with the private sector partner construction institution Innotech, they were able to sit down and craft out a strategy to make sure that the PPP arrangement fits within the ambit of the overall internationally accepted PPP arrangement, but adjust it to suit our Caribbean context,” he surmised.

Continuing that the previous BWA buildings in the Pine and Bridgetown were deemed ‘sick buildings’, the Minister said given the previous issues, he wanted to give workers the best environment in which they could execute their work.

“So, I am confident about the task we had before us to provide for the BWA. I think we have achieved that to a large extent and I think the building is proof of this, and it would now be for us to put in the other elements, which is technological capabilities and all the other frills that you need to make this really work towards the national mandate from the institution.”

Meanwhile, Ansa Merchant Bank’s, Managing Director, Gregory Hill, lauded the project and pointed out their ‘long history’ of doing business in Barbados. Noting their delight at being able to present a plaque for the financing of this “prestigious project for Barbados” to Minister Estwick; the Chairman, Dr. Atlee Brathwaite and BWA General Manager, Dr. John Mwansa, Mr. Hill stated that the PPP model has been proven to be tested throughout the world, especially in the United Kingdom.

“We have been able to modify the complexities of that model to work in the Caribbean context and I have seen many attempts to do this similar type of financing that have not been successful…It really took the leadership of Minister Estwick and the BWA Chairman to bring the parties together with focus of execution to make it happen and ensure the project was finished to the highest quality. This building will stand testament that PPP can be successful and government and private sector can come together to work on delivering quality assets for the people of Barbados,” he contended.