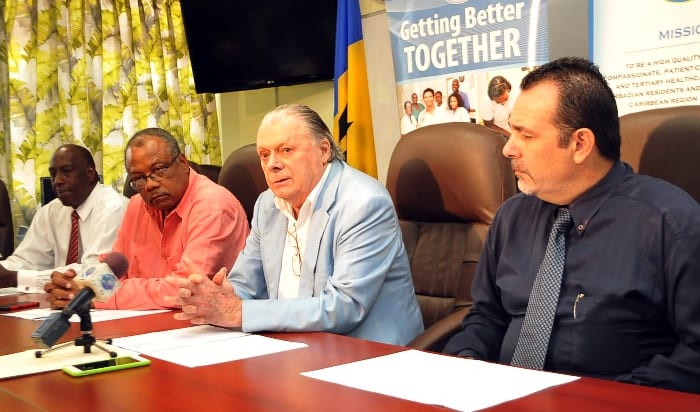 A collaboration between the Broadway to Barbados Charitable Trust, the Massy Foundation and the Government of Israel has resulted in new ultrasound equipment for the Queen Elizabeth Hospital (QEH) and training for the personnel who will use it.

Twenty-eight doctors from the Accident and Emergency Department and two from the Department of Internal Medicine are participating in a two-week training course being conducted by two Israeli doctors. They are being trained in the use of the GE Healthcare Venue 50 Anesthesia Ultrasound machine.

Health Minister John Boyce thanked the donors for the equipment and training, stressing that the provision of quality health care to the people of Barbados was an overarching goal of the Government.

Speaking at a media briefing last Monday, he explained that point-of-care ultrasonography was useful in an accident and emergency setting, where the health care team was called upon to make fast and accurate diagnoses. He added: “Very frequently, ultrasonography can be lifesaving in the fast and uncertain climate of an accident and emergency unit.”

The Health Minister expressed pleasure that the programme provided a holistic package, which supported the training of the health care team in the fundamentals of bedside ultrasonography, so that timely medical and surgical interventions could be made.

The Broadway to Barbados Charitable Trust has been a major fundraiser for the Queen Elizabeth Hospital over the last five years. Its primary focus has been facilitating the operation of a new 12-unit Medical Intensive Care Unit for which it has provided modern critical care equipment and ongoing maintenance support. Its attention is now focused on the creation of an improved A&E facility, a department which receives an average of 40,000 patient visits per year.

Mr. Boyce said that it was hoped that ultrasonography could be used as an adjunct during the triage process so that fewer cases would be seen in the A&E Department and would be treated in the less urgent care settings at the nine polyclinics.