Steps have already been taken towards ensuring that street or itinerant vending is no longer seen as illegal.

This was reiterated today by Small Business Minister Dwight Sutherland, as he spoke with media representatives following a tour of Swan Street that saw him engaging with vendors and store owners.

While pointing out that government had started the process towards ensuring this, he lauded Prime Minister Mia Amor Mottley for her passion which he said resulted in the startup of the Trust Loan Unit.

Acknowledging that the whole policy framework of vending fell within the Ministry of Small Business, Entrepreneurship and Commerce, Mr. Sutherland noted that recently Parliament signalled its intention to remove the whole criminal element, seen prior to this administration coming to office.

Explaining further, he said: “Indeed, illegal vending was criminalized.  There was a criminal element in the Market and the Slaughters Act that speaks to not just a fine, but also imprisonment, and we removed that.  So, within the next couple of weeks you will see us going to Parliament and indeed that is a move in the right direction.  We believe that vending should have its own policy framework.

“And, I am not saying that you shouldn’t have fines because when you breach regulations as it relates to breaching the rules of the organized body, there should be some discipline imposed.  But we believe that it should go to an arbitration body whereby vendors can be dealt with as opposed to be seen as criminals.” 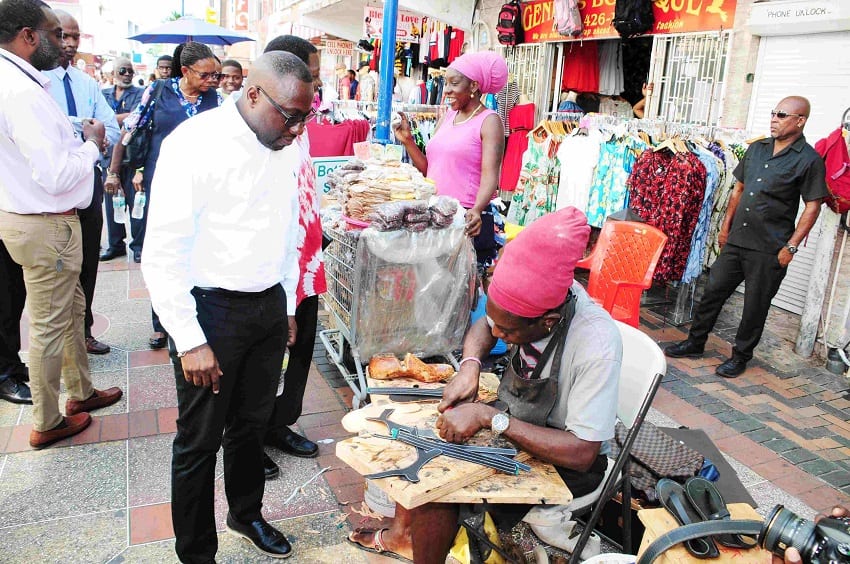 Commerce Minister, Dwight Sutherland, watches this shoemaker at work while on a tour of Swan Street, Bridgetown today. (B.Hinds/BGIS)

Minister Sutherland added that it was about empowering vending and vendors in this country whether in the agricultural sector or other areas, since vending also helped to create jobs.

“Vending now has reached a stage whereby it has to be creative, more innovative and it has to fit with the country’s development in terms of … infrastructure and where we are going.”

The Commerce Minister added that university graduates and persons in the creative industry were also part of the new category of vendors and gone are the days when vendors were just classified as persons who buy potatoes and yams from a plantation.

He said a comprehensive vending policy was on the cards and Government, along with BARVEN, one of the organized bodies and a key stakeholder, would work to ensure that it would be fundamental to moving vending forward.