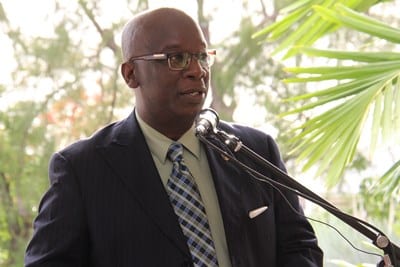 This advice was given recently by Minister of Education, Science, Technology and Innovation, Ronald Jones, as he delivered the feature address at the closing ceremony of the Teacher’s Introductory Programme at the College, Pine Hill, St. Michael.

Telling prospective teachers that their chance of finding employment at the moment was just two per cent, Mr. Jones said: “Erdiston has a B.Ed. For those of you who will not get into teaching this year, … sign up if you have not already signed up to do the B. Ed. full-time… and your chances will move from two per cent by the conclusion of this programme, to 100 percent in four years.”

The 75 graduates were further told that the programme was not just important but essential if they were going to find work as teachers within the coming year. And, the Education Minister stressed that until they completed this programme, their chances were sure to stay at two per cent.

Reminding those gathered that the Ministry had recently appointed over 400 teachers who were formerly in temporary posts, Mr. Jones added that those teachers now in the temporary positions would be appointed as vacancies became available.

The former teacher also pointed out that while having a salary was important, training was also essential, and in line with his Ministry’s philosophy of preparing teachers for the classroom.

Erdiston’s new B.Ed., which is scheduled to commence in September, is aimed primarily at persons interested in teaching at the primary level. While it targets all persons desirous of pursuing a teaching career, there is a particular emphasis on school leavers.