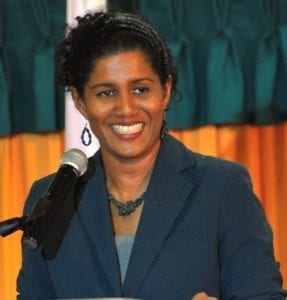 Present and past employees, as well as boards of management of the National Insurance Scheme (NIS), have come in for high praise from the Minister of Labour, Social Security and Human Resource Development, Senator Dr. Esther Byer Suckoo, for their role in building up the institution for the last five decades.

Senator Byer Suckoo noted that despite the firm foundation laid, there have been several adaptations and reforms to improve the NIS’ efficiency; increase its revenue; and ensure its future stability.

Akin to these reforms, the Labour Minister said the public was expecting greater accountability, high customer service, timely processing of claims and an ease in doing business at the NIS.

Senator Byer Suckoo continued: “Today’s customer is more discerning, demanding high standards of service. They expect the NIS staff to be courteous, knowledgeable, efficient and effective. They also expect to do more online than in line.  And, as paying/contributing customers, they expect timely processing of their claims as a right.”

The Minister noted that she had witnessed the shift in client behaviour in other spheres and seen how enterprises have had to adapt. She said the NIS was no different, and that she was pleased the focus at the institution was on improving customer relations through staff training.

“The importance of ongoing training is critical to the development of any institution.  It expands the knowledge base of employees; reduces areas of weakness; improves employee performance and thus creates some measure of satisfaction,” Dr. Byer Suckoo stated.

The Labour Minister pointed to the discussions on the meeting’s agenda on social security training and in particular, the Executive Diploma in Social Security, and expressed the hope that other solutions for the delivery of service would also materalise.

The three-day conference will conclude on Friday.