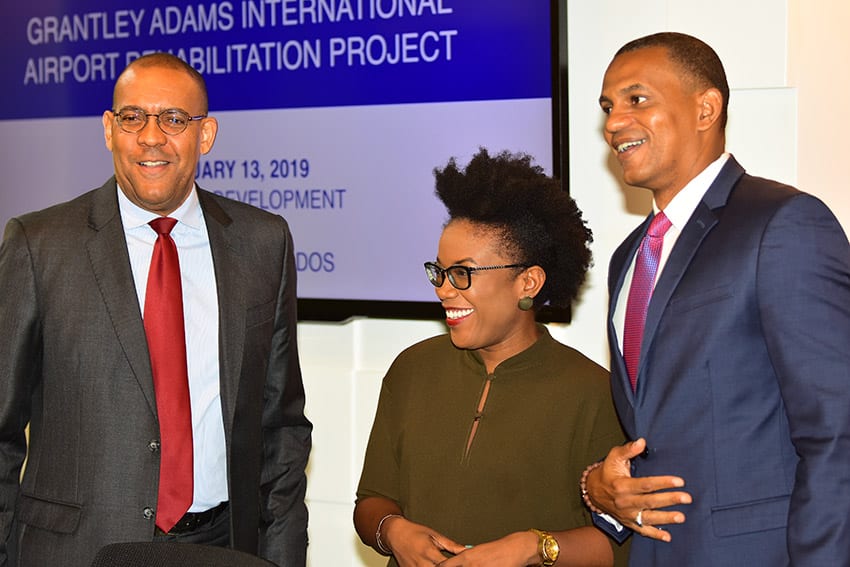 Tourism Minister, Kerry Symmonds; Minister in the Ministry of Economic Affairs and Investment, Marsha Caddle; and Director of the Projects Department, Caribbean Development Bank (CDB), Daniel Best, in conversation at the official launch of the GAIA’s Pavement Rehabilitation and Expansion Project at the CDB today. (C.Pitt/BGIS)

A paper would be going to Cabinet tomorrow, Thursday, February 14, to gain approval for a worldwide tender for the creation of a public-private partnership for the development, operation and expansion of the Grantley Adams International Airport (GAIA) Inc.

Recalling that this would have arisen out of a meeting with Prime Minister Mia Mottley and airport staff last October, Minister Symmonds said she gave the mandate to the Ministry of Tourism to pursue this policy.

Pointing out that Government aimed to work with the International Finance Corporation, the private sector arm of the World Bank to obtain the technical expertise which Barbados does not possess with respect to the project, he stressed: “This is nothing that has not been done before in the Caribbean. Those people who are familiar with aviation and certainly the Bank [CDB] would have its experts.  And, you would know that Suriname, St Maarten, Jamaica…and then Martinique.  There are a number of airports around the region which would have gone through this process because it lends not only an improved operational efficiency, but for our purposes in Barbados, it is critical because of the capacity constraints.

“Our two terminals – arrival and departure – are literally bursting at the seams and we cannot continue in this vein.  To be fair to the management and staff of the airport substantial developmental work must be done. The country is not in a financial position where we can add that to one of the several guarantees that the Government of Barbados has been asked to make.… So, we have to find a more creative way of doing this.”

The Tourism Minister added that the proposal would be that the concessionaire, once identified, would be given an operational lease for a period of 20 to 30 years, allowing for a reasonable time to have a return on the investment.

Stating that the ownership of the airport would remain with the Government and the people of Barbados, Mr. Symmonds said at the end of the period of the operational lease, the control of the airport would revert to the GAIA Inc., which for the foreseeable future, once given the blessing of Cabinet, would then be a holding company with regulatory oversight of all airport and civil aviation activities.