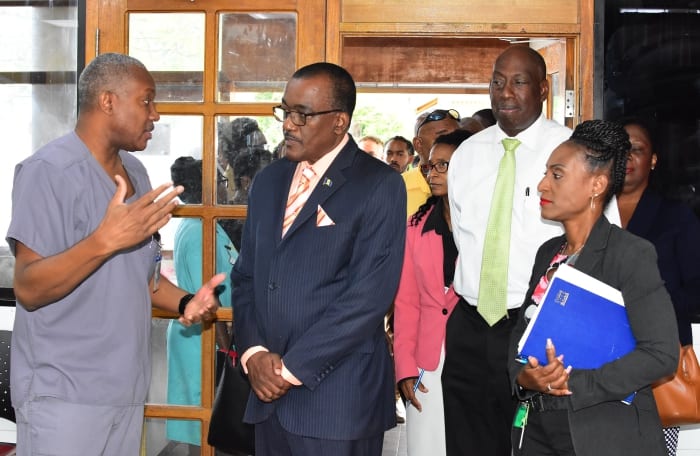 The newly-designated Ministry of Health and Wellness has set as a major goal to provide the best possible service at the Queen Elizabeth Hospital (QEH) for Barbadians, with priority being given to significantly reducing the wait time for medical attention.

Steps outlined to achieve this objective include the physical expansion of the Accident and Emergency Department; an increase in beds; staff retraining; and a comprehensive examination of the internal processes at the hospital.

News of this came from Minister of Health and Wellness, Lieutenant Colonel Jeffrey Bostic, after he toured the Accident and Emergency (A and E) Department at the QEH last Friday.

He revealed that approximately 40,000 patients visited A and E every year, and, according to the statistics he had reviewed since taking office, half of these patients did not need to be there.

One way this problem will be addressed, he explained, is through the 24-hour service proposed for the Randal Phillips and Winston Scott Polyclinics.

“What we are doing with the polyclinics is to provide diagnostic and dispensing services so that patients who attend those polyclinics, generally speaking, would not have any need to come to A and E. Once we get the two polyclinics up and running, numerically that is going to take some of the load off of A and E.”

Addressing the extended waiting periods in A and E for medical attention, he said a major challenge was limited space with an inadequate number of treatment rooms and stat rooms.

“The physical expansion will certainly bring some relief to both patients and service providers but that alone is not going to solve the issue that we have here and so that has to be coupled with an examination of the internal operations in order to produce the desired result,” the Minister said.

Another problem identified was inadequate bed space in A and E, an issue, Lt. Col. Bostic maintained, was not unique to that department but “a hospital problem”.

“My understanding is that there are 25 beds dedicated to patients in A and E, so what that means on a daily basis, give or take a few, is that A and E requires 25 bed spaces on the wards for people who have to be admitted.

“If you do not have the available space on the wards, it is going to have a domino effect for A and E, so that is something that has to be dealt with in order to speed up the process.” 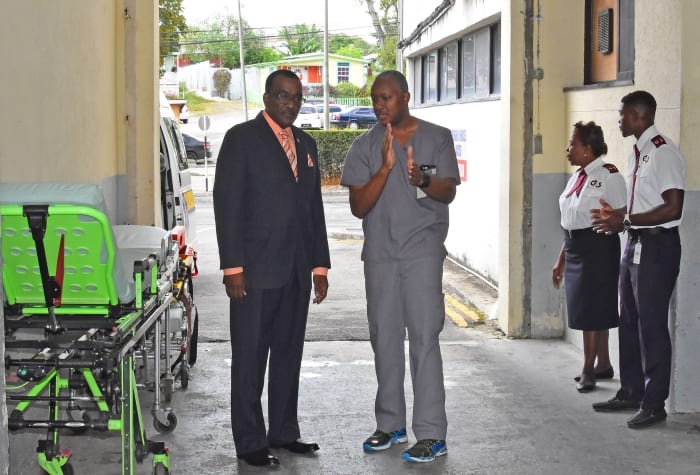 The Health and Wellness Minister suggested that with the introduction of the Health Services Contribution of 2.5 per cent, which is expected to generate $45 million in a fiscal year, that the QEH will be in a better position to plan and to execute those plans.

Noting that the revenue generated will be sent directly to the QEH, he submitted: “What that does for the QEH is that it allows the management of the hospital to be able to plan properly, to be able to execute the programmes that they have on line and to improve things here at the QEH, knowing that money will be coming every month, because in the past, money was budgeted for, voted for, but the money did not come as frequently as promised and so it was difficult for the hospital to be able to do its business. By introducing this measure, this now facilitates the preparation of plans by the hospital and the execution of those plans.”

In response to whether there will be an increase in staff numbers to facilitate the upgrade, Lt. Col. Bostic said: “There’s no point in expanding the service if we don’t have the required staff in order to carry out the functions, so that has to be looked at. In some cases, it may be achieved by doing some retraining…A and E has already started that process in that they have been training the orderlies assigned to A and E to be able to do some of the basic things that the nurses are doing at this point and time.

“That is something that we will have to look at in a serious way because that is one way of improving things without having to employ more staff…We have to think out of the box. We have to be innovative and that is what we will do.”

The Minister of Health and Wellness concluded: “At the end of the day, if we spend money to expand services at A and E, if we provide the hospital with much-needed funds, as we are doing, then we must satisfy the Barbadian public that the money is going to be well spent and the only way that we are going to achieve that is to ensure that we have patient satisfaction at the end of the day. So it’s a combination of physical expansion and enhancing internal processes and procedures.”