Record Number Of Cruise Arrivals For 2017 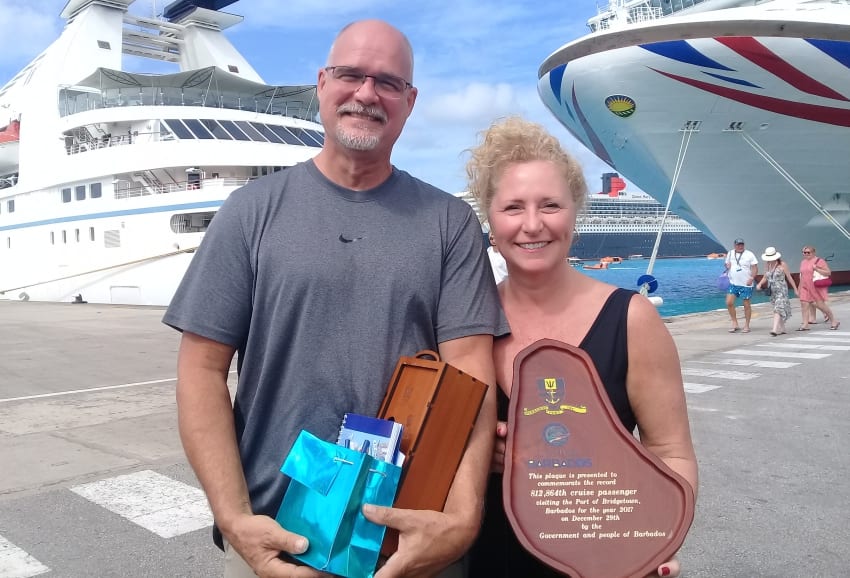 Record-breaking cruise passenger Laura Thieman from Dayton, Ohio posing with her husband Tom at the Bridgetown Port today. Ms. Thieman was the 812, 864th cruise arrival for the year. (N.Phillips/BGIS)

Friday, December 29, 2017, will go down as a significant day in the history of Barbados’ cruise sector, as it saw the island welcoming its record 812,864th   cruise passenger.

Tom and Laura Thieman from Dayton, Ohio, United States of America, arrived at the Bridgetown Port this morning, aboard the Windstar.
The couple was welcomed by Tourism Minister Richard Sealy and Chief Executive Officer of the Bridgetown Port, David Jean-Marie, and other officials. They were presented with a plaque to mark the occasion, as well as several gifts.

Mr. and Mrs. Thieman said this was their first time visiting Barbados and were excited, especially after receiving such a warm welcome, from the officials.

They added that they were interested in participating in many activities, including going on an island tour.