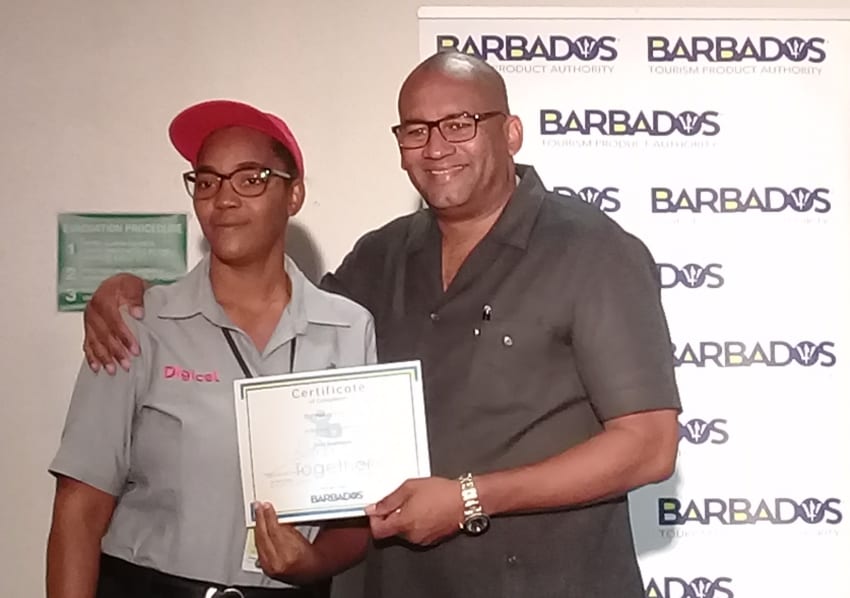 Minister of Tourism, Richard Sealy, presenting one of the participants of the training course with their certificate. (N.Phillips/BGIS)

First impressions count, especially in the tourism sector, and it is with this in mind that the Barbados Tourism Product Authority (BTPA) is training porters at the Grantley Adams International Airport (GAIA), traditionally known as Red Caps, as they are among the first personnel to come into contact with visitors to the island.

The training is being provided under the BTPA’s Barbados Together programme, and is designed to equip those workers within the sector with the knowledge and skills to help them better able to interact with visitors.

Minister of Tourism, Richard Sealy, endorsed the initiative during his address at the opening of the workshop, held in the conference room at the GAIA on Monday. He described it as a “spot-on” approach and one of the keys to the further enhancement of the overall visitor experience.

Mr. Sealy emphasised the Red Caps’ importance to the tourism product, stating that not only were they “frontline ambassadors”, but also part of a feature unique to Barbados.

“The modern tourism destination is about differentiation, what do you have to offer that cannot be experienced somewhere else…and it is a fact that one of the peculiarities to the Barbadian experience is the Red Caps.

“We have a very high rate of repeat visitors, many of them have formed relationships with Red Caps and look forward to seeing them. [There have even been situations where] Red Caps have gone overseas to spend two weeks’ vacation with some of their customers,” Mr. Sealy noted.

The Minister also lauded the BTPA for its work in this regard to date, adding that it would serve in the further revamping and uplifting of porter services at the airport. He explained that this process began through the public/private sector partnership between government and Platinum Services Limited. 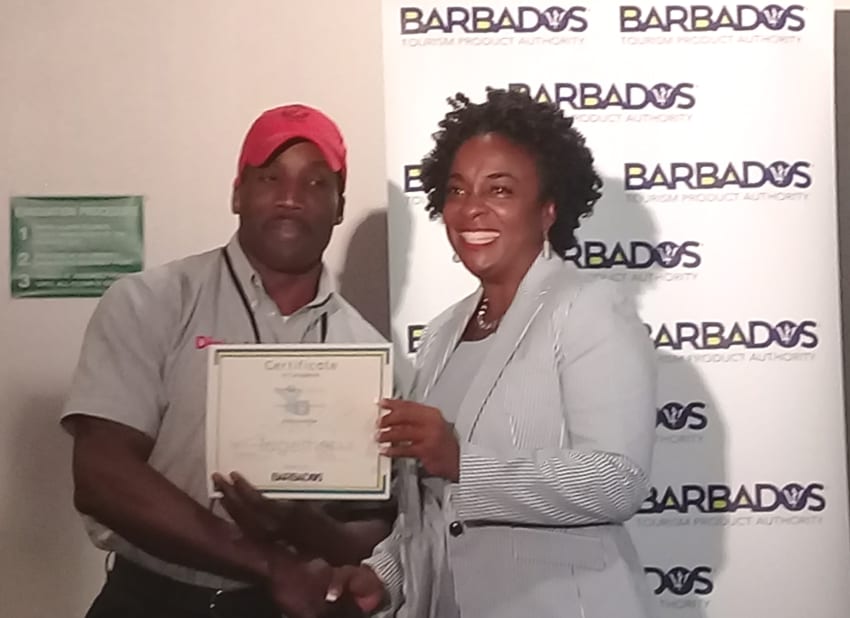 In her remarks, Chief Executive Officer of the BTPA, Dr. Kerry Hall, said the aim of the workshop was to “bridge the gap” in the tourism value chain at the airport by engaging and educating Red Caps on key aspects of the product so they could better interact with tourists.

She, therefore, appealed to them to familiarise themselves with the island’s history, heritage, sites of interest and other important information.

Also speaking at the opening ceremony was Chairman of Platinum Services Limited, Ralph ‘Bizzy’ Williams, who encouraged the Red Caps to not only provide quality service but to also interact with tourists, as friendliness and hospitality were two major qualities for which Barbados was known within the tourism sphere.

“There is no second opportunity to make a first impression, so it is up to you all and I believe that you’re up to it and will do it. I would like to thank Dr. Hall and her team for providing the training and all of those who have facilitated,” Mr. Williams said.

Monday’s ceremony saw the first cohort of 20 Red Caps being presented with certificates of completion, and the training of the second group.

Manager of Guest Experiences with the BTPA, Marsha Alleyne, outlined the activities undertaken during the five-day programme. These included: education about customer service best practices; island tours to raise awareness about various sites of interest; and training in how workers should treat persons with disabilities.