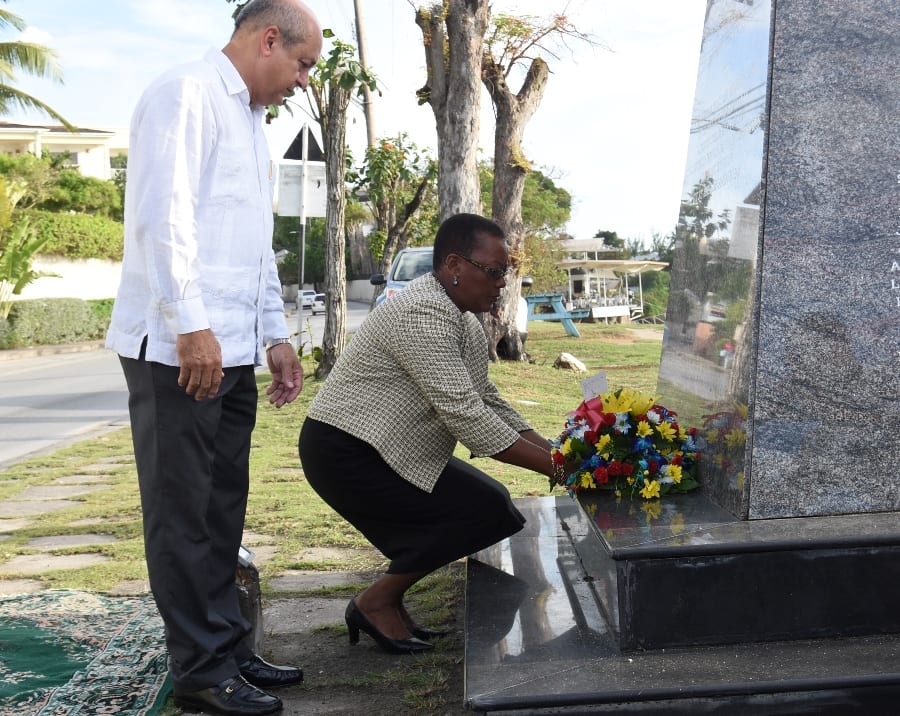 A tragedy which was intended to create fear in us, has instead strengthened our commitment to build lasting bilateral and regional relations with our sister country Cuba, says Minister of Foreign Affairs and Foreign Trade.

Senator Maxine McClean was addressing the 41st Cubana Commemorative Ceremony, at the site of the monument at Paynes Bay, St. James, which honors the lives of the 73 persons who were travelling onboard the Cubana Flight 455.

“When we look at this monument let us all be reminded that the act of terrorism was intended to create fear in us, some four years after Barbados together with three other CARICOM countries established formal diplomatic relations with the Republic of Cuba” she explained, adding that in in two months, Barbados will be celebrating 45 years of diplomatic relations with Cuba.

Senator McClean said the Government of Barbados condemned the act of terrorism that claimed the lives of the passengers and crew, which included nationals of Cuba, Guyana and the Democratic People’s Republic of Korea.

“Barbados honours the memory of the martyrs of October 6 1976. We will not forget them and certainly as we look around the region and the world we must remember this event.”

A young student of the University of the West Indies Cavehill Campus at the time of the crash, the Minister said she could recall hearing the flight going over and recognizing there was something wrong.

“We have also come to remember and pay tribute to the many family members whose pain and recall of this terrorist act will never be quelled. Barbados continues to stand in solidarity with all of them.” She added that the region must maintain a zero tolerance disposition to all strategies that “seek to divide and conquer us”.

“This monument around which we gather today not only honors the memory of the victims of this tragedy but also stands as a visible reminder that Barbados and the Caribbean region have no immunity from acts of terrorism.”

“The transboundary nature of terrorism underscores the importance of the regional cooperation towards its eradication. We must also strive to eradicate the seeds of terrorism where they exist and strengthen security and operational efforts.”

The monument, which was erected on the West Coast in 1998, was designed by Virgil Broodhagen, son of well-known Barbadian sculptor, Karl Broodhagen.