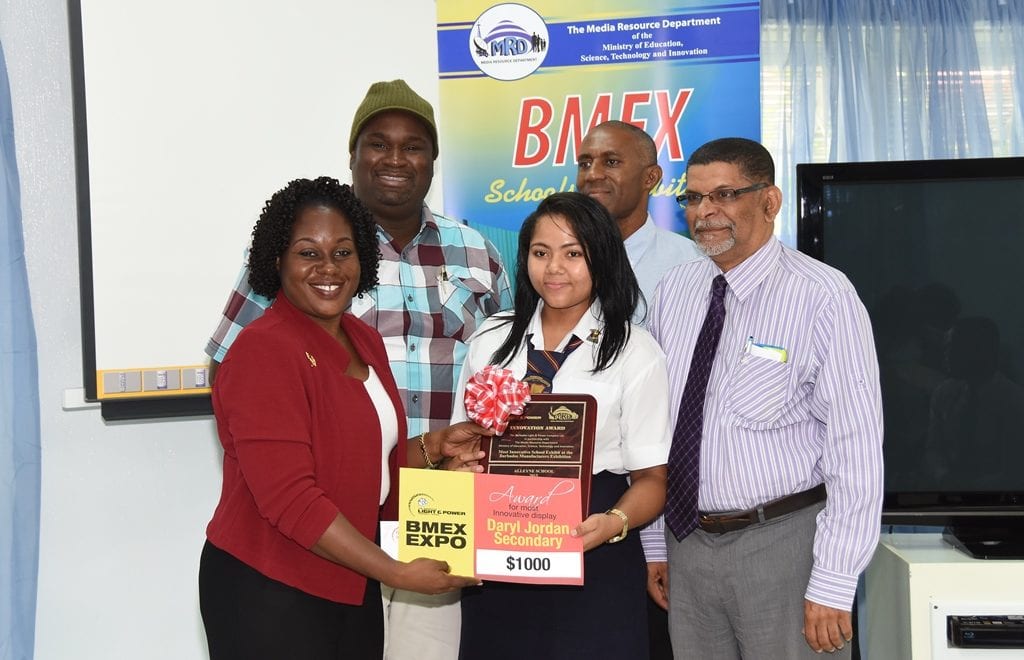 A partnership on renewable energy between the Barbados Light & Power (BL&P) Co. Ltd. and the Media Resource Department (MRD) has been welcomed and will continue.

This was emphasised today as officials from both sides addressed a prize-giving ceremony at the Elsie Payne Complex for students who participated in two competitions – the BL&P/MRD Electricity and Renewable Energy Science Exposition, and BMEX 2016.

Acting Chief Media Resource Officer, Burkley Lowe, noted the partnership, which was started in September 2015, had resulted in sponsorship to the tune of $16,000 being given by BL&P to finance competitions and projects.

He said: “The MRD celebrates private and public sector partnerships and, all things being equal, the MRD will continue such partnerships for the benefit of education in Barbados.

“Besides the monetary contribution… the value of this competition must be measured in the experiences given to the students either at the private or public primary and secondary schools to participate in an exercise of collaboration, investigation and discovery.”

Commending the relationship further, Mr. Lowe said the MRD was devoted to providing the nation’s children with opportunities to elevate their experience in science and technology. He stressed this was because the department believed that scientific investigation and discovery was the future of Barbados’ economy.

Mr. Lowe added: “To accomplish, this we must be diligent; our goals must be in harmony with the goals of the nation and we must demand maximum results from ourselves and our charges.”

Manager of BL&P’s Communications and Government Relations, Jackie Marshall-Clarke, expressed pleasure at having partnered with MRD on the inaugural Exposition, and noted that their involvement began in 2011 when they sought to help children understand electricity and the value of the product.

“In 2015, we decided to support them on their prizes and their BMEX exposition and then together we conceptualised the exposition,” she explained.

While noting the myriad ways in which her company was now reaching out to schools through posters and tips on safety, Mrs. Marshall-Clarke said they remained “very active” in schools through visits and safety presentations.

“Through this partnership with the Ministry, we have also found value with specific schools and the Daryll Jordan Secondary is one such school because of their close proximity to our new solar plant at Trents, St. Lucy. We have started a relationship with them and when it was World Environment Day, we were able to provide trees for them and when we had the ground breaking ceremony for our solar plant they provided the music,” she noted.

The Communications Manager said that while the BL&P provided the opportunity for schools to display their exhibits at BMEX for Barbadians to see, it was their intention to take it further, by providing the opportunity for the same schools’ exhibits to be seen regionally as well at the Barbados Renewable Energy Association Regional Conference in November.

Daryll Jordan Secondary was the recipient of the prize for The Most Innovative School Display at BMEX 2016, and the first prize in the secondary category of the inaugural BL&P/MRD Electricity and Renewable Energy Science Exposition.