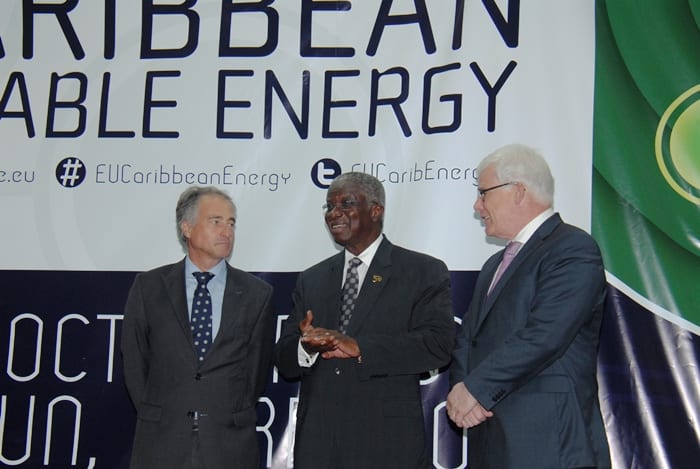 The recently-concluded Energy Road Map for Barbados shows that increasing the renewable energy penetration level in the electricity supply beyond the 65 per cent target is “technically feasible and economically viable”.

This disclosure came today from Prime Minister Freundel Stuart as he delivered the feature address at the inaugural two-day European Union-CARIFORUM Sustainable Energy Conference and the signing of the Joint Declaration at the Lloyd Erskine Sandiford Centre.

Mr. Stuart said the report shows that the country could achieve such a target of 76 per cent by 2030, with a reduction of electricity system costs by BDS$200 million per year. He added that it could also create over 5,000 green energy jobs.

“We have already started on this path by continuing the Barbados policy of granting attractive fiscal incentives for green energy initiatives. We have legislated a new regulatory regime to enable independent power producers at the distributed and utility scale level to sell electricity to the grid from renewable energy systems. That regime will be fully implemented by the middle of next year,” he revealed.

The Prime Minister pointed out that there were now over nine megawatts of intermittent renewable energy generating systems connected to the grid, with most of them being solar photovoltaic units.

“Another 10 megawatts will be commissioned this month, and we expect that by this time next year, we would have issued licenses for 65 megawatts of renewable energy generation capacity to be commissioned by early in the year 2018,” he further disclosed.

He noted that to date, over 1,000 householders and businesses had such systems connected to the grid, demonstrating that the democratisation of energy generation could be achieved with solar photovoltaic power.

Mr. Stuart said that it was necessary for the region to find less expensive and more sustainable sources of energy. He added that the cost of the importation of fossil fuels in Barbados in 2012 was equivalent to a staggering 9.6 per cent of GDP.

He stressed that Government’s vision for the country included enhancing economic growth by reducing energy costs; improving energy security by the reduction of the importation of fossil fuels through the increased penetration of renewable energy and energy efficiency into the energy mix; and reducing the emission of greenhouse gases and pollutants from the combustion of fossil fuels.