Repeated Violence Of Concern To AG 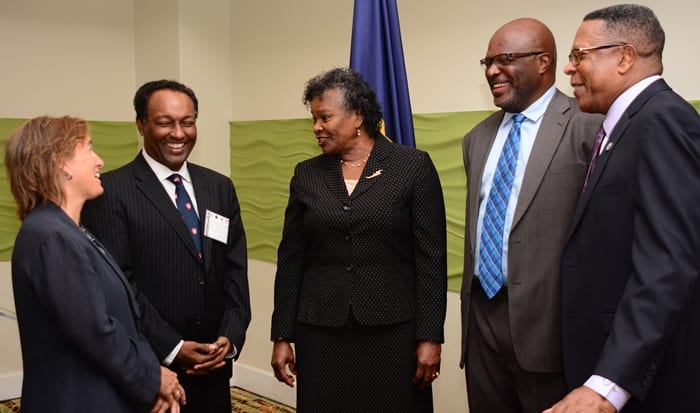 Repeated and senseless violence in Barbados and across the region has been blasted by Attorney General, Adriel Brathwaite, as “unprecedented”.

Speaking this morning at an Anti-Money Laundering Workshop for Judges and Prosecutors at the Radisson Aquatica Resort, Mr. Brathwaite stated that he was convinced more and more that the region as a whole seemed to be “under attack” given the escalated level of violence.

Expressing concern over the way of life in recent years, the Attorney General, who also holds responsibility for Home Affairs, said such workshops were important and essential.

He continued: “They have the best resources to work out how [to] get around our respective territories, and inflict as much harm as possible.  And, as I said previously, I am very concerned over the state of our region and the direction that it is heading.”

The Organization of American States’ (OAS) Representative to Barbados, Francis McBarnette, told attendees, among them Acting Chief Justice, Sandra Mason; and Director of Public Prosecutions, Charles Leacock, that the Global Economic Crime Survey 2016 estimated that global money laundering transactions were at two to five per cent of the global Gross Domestic Product or approximately US $1 to $2 trillion annually.

“Despite these estimates, studies by the United Nations Office on Drugs and Crime show that less than one per cent of global illicit financial flows are being seized by national authorities…,” he pointed out.

Mr. McBarnette further added that the high rates of violence throughout the hemisphere, including the Caribbean, underscored the importance of focused efforts to put an end to, or drastically reduce, money laundering, terrorism financing, and related offenses.

“At the OAS, we are convinced that hemispheric cooperation is essential to enable our Member States to successfully meet all these challenges.  …The relatively low number of sentences related to these offenses and the low amount of assets transferred to the State in the confiscation process is a clear indication of the need for improved and increased international cooperation among jurisdictions for trafficking, locating and recovering assets in money laundering investigations,” he opined.