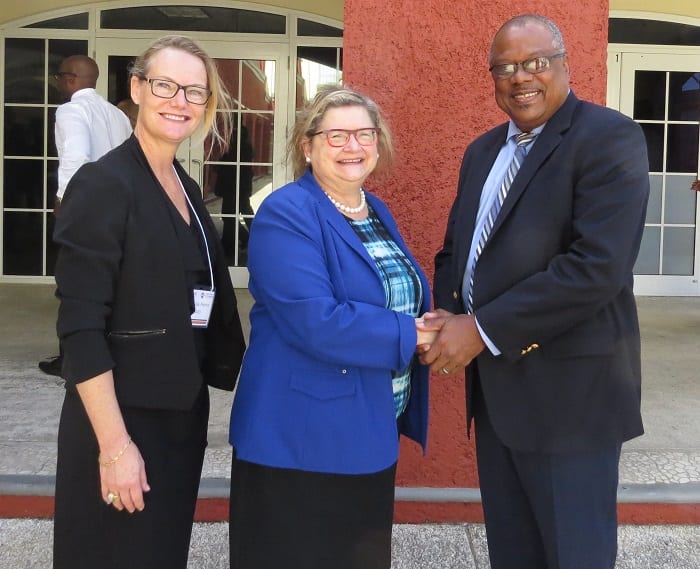 As external aid for HIV programmes decreases across the Caribbean, an increased mobilisation of domestic resources is necessary to ensure sustainability and continued access to programmes in affected countries.

This declaration came from Health Minister John Boyce today as he addressed the opening of a two-day workshop on Domestic Resource Mobilisation for HIV in the Caribbean at the Courtyard by Marriott.

The meeting has brought together technocrats from Ministries of Finance and Health in Barbados, Guyana, Suriname and Trinidad and Tobago.

The primary objectives are to discuss the most urgent priorities for problem-solving and funding HIV, and to develop a country-specific action plan to ensure countries are able to respond with their own resources in the face of the expected decline in external financing.

Mr. Boyce maintained that the “huge mobilisation of resources” for the global HIV response over the course of the epidemic had been unprecedented in the history of public health.

In the last decade, he disclosed, tremendous progress had been made in the prevention, care and treatment of HIV. He noted the massive roll out of antiretroviral treatment, adding that because of dedicated programmes within countries and increased funding, HIV-related health outcomes had improved and HIV incidence had stabilised and even declined in some countries.

However, he stated, the shift  towards domestic funding was now necessary as external aid declined, with the United States, which remained the largest contributor to the global HIV response, proposing cuts of almost 20 per cent amidst competing demands for donor budgets.

The Health Minister told the audience: “I therefore encourage you to support your own programmes and strategies for mobilising domestic resources and take responsibility for your own needs. As Health Ministers, we are often the most aware of the challenges the health sector faces in regard to ineffective or insufficient spending. Thus, we can play an important role in creating advocacy messages that put health at the top of our governments’ agendas.”

Mr. Boyce submitted: “Shifting the funding paradigm towards domestic funding is challenging, but it has the advantages of fostering ownership and accountability in the implementation of the national HIV response and increasing its sustainability.”