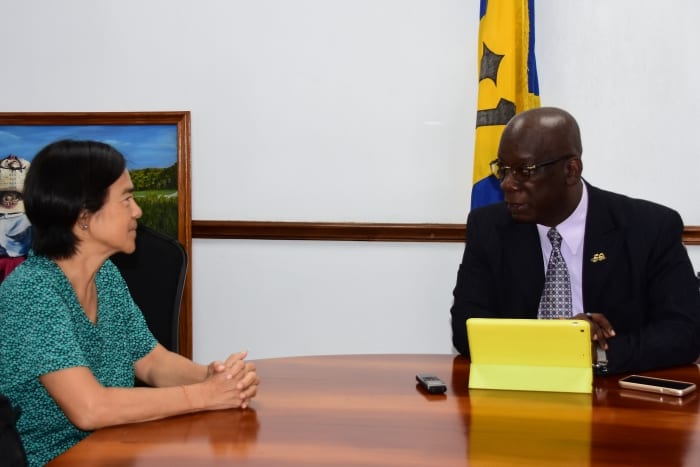 Education Minister, Ronald Jones and retired UNICEF Representative for the Eastern Caribbean Area, Khin-Sandi Lwin in discussion at their meeting at the Elsie Payne Complex. (C.Pitt/BGIS)

Barbadian school children have benefited greatly from the work of the United Nations Children’s Fund (UNICEF), thanks in part to retired UNICEF Representative for the Eastern Caribbean Area, Khin-Sandi Lwin.

Education Minister, Ronald Jones, intimated this recently as the retired UNICEF Representative paid a farewell call on him at the Elsie Payne Complex.

Lauding her near-six-year stint on the island, Mr. Jones said: “It was good to have you. The Ministry, our children and Barbados, as a whole, have benefited greatly from your involvement and the programmes that emanated from UNICEF. Those programmes emphasised the interest and welfare of Barbadian children which was really remarkable.”

Ms. Lwin’s support of programmes within schools, such as the Schools’ Positive Behaviour Management Programme (SPBMP) and the Barbados Government Information Service’s UNICEF/BGIS Essay and Poster Competition, did not go unnoticed by the Education Minister, who further recalled his own participation in the latter as featured speaker and presenter of prizes.

“Not only did you focus all of the work through the Ministry of Education but your engagement with other non-state actors who had an interest in children was really good…. I paid attention to that and how well you worked with the BGIS; so there has been a lot of good work on the part of UNICEF, truly a product of your presence,” he stated.

UNICEF was also commended for readily accepting Barbados’ name change of its ‘Child-Friendly Schools’ initiative to the ‘Schools’ Positive Behaviour Management Programme’ (SPBMP) back in 2011, and Mr. Jones said he perceived all schools as child-friendly with positive students and positive behavioural management issues.

Emphasising that SPBMP continues to be one of the island’s flagships in education, he stated: “We have benefited quite significantly and whenever we have called for a programme we have been able to get assistance and guidance and the contact between this Ministry and the officers [at UNICEF] was really, really deep…. The cross-fertilisation of cultures and appreciation of the cultures is something that people get to learn as a result of their posting.”

In accepting the accolades, Ms. Lwin added that UNICEF had also worked with the Ombudsman’s office; the Child Care Board on Child Rights; and undertook training with several media personnel. While acknowledging she was grateful for 35 years in the international arena, where most was spent with UNICEF, she said for her such work was not over and on return to her homeland, Myanmar, she would continue efforts at Women’s Leadership training.

The two officials also discussed the effects of Hurricanes Irma and Maria on Dominica, the British Virgin Islands, Turks and Caicos and Anguilla, and efforts to have schools up and running and children educated, amidst loss of homes and possessions.