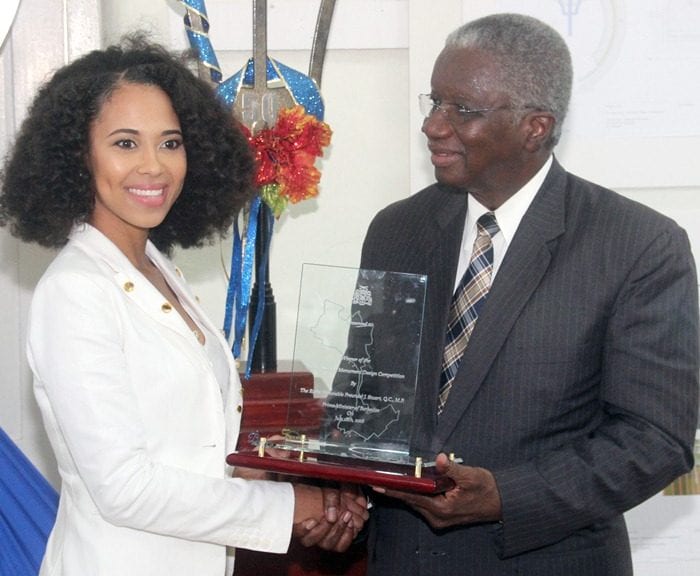 Taisha Carrington accepts her prize from Prime Minister of Barbados, Freundel Stuart, after she was named the winner of the Barbados at 50 Monument Design Competition. (C.Henry/BGIS)

Come November 29, Barbadians and visitors are expected to flock to the Garrison Savannah to be a part of history in the making.

They will witness the unveiling of the 50th Anniversary National Monument in what is expected to be a moving and emotional ceremony – a short impactful event that will take place between 10:30 p.m. and midnight and to which all Barbadians and visitors are invited. The event is free to all.

The idea of creating a monument which would commemorate that moment in Barbados’ history when the Rt. Excellent Errol Walton Barrow, the first Prime Minister of Barbados, witnessed the raising of the Barbados Flag – the Broken Trident, for the first time on November 30, 1966 at the Garrison Savannah, was the basis of an open design competition.

The winning design was created by art student, 23 year old Taisha Carrington.  That design has been transformed into the structure which will be revealed on the night of November 29 as the ‘Barbados at 50 Monument’.

The monument, a pathway of Independence, chronicles the foundation years of Barbados’ nationhood.  Along the pathway are featured some of Barbados’ defining moments as a nation, while strategically placed benches will bear the names of successive leaders, who steered the island through those 50 years.

Ascending the platform, a central glass will reflect the island’s significant achievements, and Neptune’s Broken Trident will connote the bold break from a colonial past. As the symbolic journey ends, the supersized Barbados Flag will stand as a proud symbol of nationhood that signals a limitless future of possibilities.

The reveal of this 50th Anniversary Monument will appeal to Barbadians who want to come out and witness it first-hand but it will also make an exciting televised event for those who choose to stay at home.

The evening will begin with a musical interlude of Barbadian classics, followed by a Mass Choir, backed by the Barbados Defence Force Band, who will lead in the singing of the National Anthem.  Special attention should be paid to the lyrics which, on that night especially, should resonate deeply with each and every Barbadian.

This will be followed by a procession of religious leaders in full ceremonial garb onto the Savannah, including the various Christian denominations, the Muslims, the Hindus, those of the Bahai faith and the Rastafarian belief system. It will be a powerful and all-embracing celebration of faith and spirituality.

Other elements of this moving ceremony will include prayers, a hymn, virtuoso trumpet player – Ricky Brathwaite, and a dramatic interpretation of a commissioned narrative poem written by four award-winning Barbadian poets – elders, Winston Farrell and Esther Phillips and emerging writers, DJ Simmons and Aprille Thomas.

These eloquent spoken words will be interpreted by four of our nation’s most skilled and creative dancers – Aisha Commissiong, Justin Poleon, Megan Navarro, and Shea Best.

There will also be a message from our Prime Minister as well as the singing of the 50th Anniversary Song. As the clock starts to toll the midnight hour, and the final elements of the monument are placed by the selected dignitaries, the 50th Anniversary Monument will be enveloped by light and finally revealed to the world.  The supersized  Broken Trident, which forms part of the monument, will be hoisted as the National Anthem is played.

And, as the wind picks up the flag, our 50 Lights of Hope will fill the night sky, carrying our dreams and wishes and the pledges made by Barbadians throughout the year, high up into the heavens.

The Executive Producer of this event is the 50th Anniversary of Independence Celebrations Secretariat and it is being produced by the National Cultural Foundation and the Barbados Defence Force.