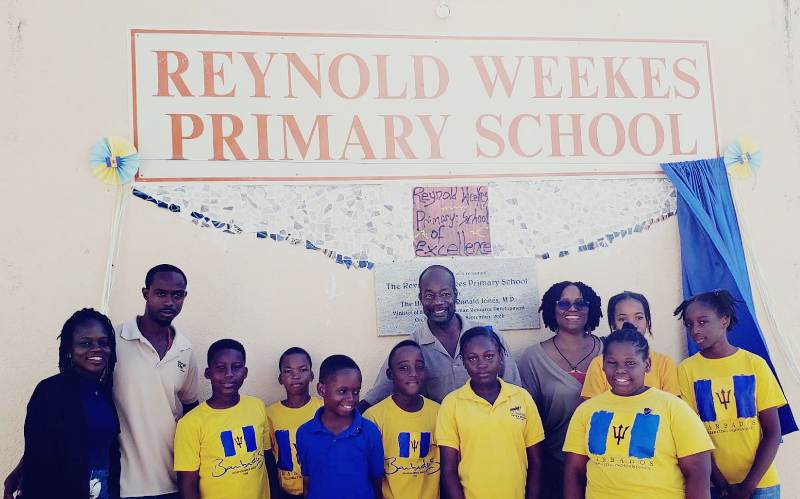 Young muralists and teachers from the Reynold Weekes Primary School pose after unveiling their work. (GP)

Students of the Reynold Weekes Primary School have accomplished a “first”, by creating mosaic tile murals throughout their school. The murals encapsulate 21st century skills.

The project, which was coordinated by teacher Daria Cave, saw pupils from ages four to 11 not only creating the murals, but the tiles which were used in the pieces.

According to Ms. Cave, 21st century skills include creative and critical thinking, collaboration and communication.  She said the mural project was about stepping up on those skills and using child-friendly ways to recreate them in children’s minds.

“Spatial awareness, mathematical design and thinking in terms of measurement … all of those go into mosaic tiling.  So, I took them up to Earthworks Pottery on Saturdays and we just created, and created on the theme of excellence. They envisioned what they wanted to excel in – swimming, reading, dancing, exploring, cricket, athletics – and created the murals around those areas, and put them up throughout the school,” Ms. Cave explained, adding that they even broke up the tiles themselves.

She pointed out that Reynold Weekes Primary was the first school to experiment with mosaic tile murals, and said that one aim of the project was to show pupils that art can be created from anything.

The project not only changed the aesthetics of the school, but it also resulted in changes in the children.

“I had some shy, introverted and wayward children at the beginning of the project and the creating of meaning through art has just put a sparkle in their eyes and there is now meaning where there was no meaning before. For an eight or 10-year-old to have that meaning, that is something quite remarkable.  And they did it.  I just provided the medium to work in,” Ms. Cave remarked, stating that the murals will be used to show future students the areas in which pupils were excelling in the year 2018.