Holetown, St. James is poised to create history by becoming the first community in Barbados to receive the UNESCO internationally approved Tsunami Ready Certificate of Recognition.

Come Thursday, March 15, the western community will take centre stage in this year’s annual Caribe Wave 2018 exercise as it seeks to fulfill the requirements of becoming tsunami ready.

Director of the Department of Emergency Management (DEM), Kerry Hinds, explained that the Road to Tsunami Recognition campaign was the brainchild of members of the Technical Standing Committee on Coastal Hazards (TSCCH), following a committee meeting last year.

“It was important that we sought to show or demonstrate to the world that Barbados wanted to be tsunami ready,” she added. The TSCCH committee set out to do just that, designating Holetown as its pilot.

Ms. Hinds explained that Holetown is a coastal community, susceptible to coastal and inland flooding. She added that it had benefitted from community-level programming and pilot projects in the past, which included a tabletop exercise.

The DEM Director noted that when they were approached to take part in the Barbados-based scenario, members of the Holetown community were willing to see how they could improve on their readiness.

The campaign was officially launched last November with the unveiling of a tsunami sign at the Folkestone Park and Marine Reserve in Holetown. That sign will add to the requirements the community is now required to fulfil to achieve the designation. 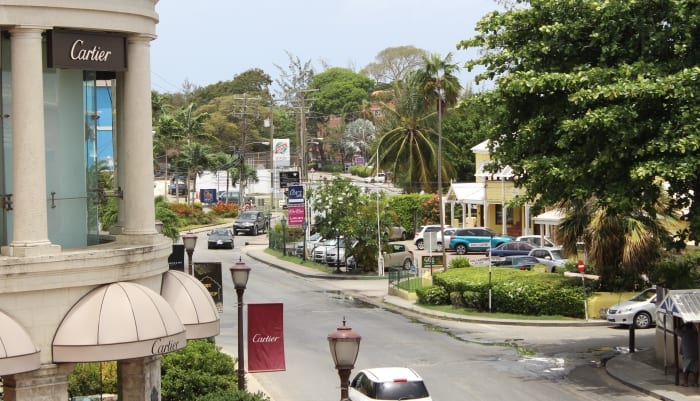 Ms. Hinds explained that the Holetown community was required to complete 10 areas in its preparedness efforts before the UNESCO Recognition Board could issue the certificate. The requirements for the designation are broken down into the three phases of the disaster management cycle – mitigation, preparedness and response.

Under mitigation, she explained, the Holetown community was required to designate and map tsunami hazard zones. In addition, there needed to be a public display of tsunami information and response that identified the location of danger zones; when persons were leaving or entering a hazard zone; and the evacuation routes and assembly areas.

Under preparedness, the pilot community needed to produce easily understood tsunami evacuation maps which outlined what persons needed to do; where they were in the community; and where they needed to go if a tsunami occurred.

“There must be development and distribution of public awareness materials. Like any other preparedness phase, we have to ensure that we conduct an annual community exercise and we have to hold at least three outreach or educational initiatives annually,” Ms. Hinds pointed out.

Meanwhile, under the response phase, the DEM Director said the there was a need to incorporate the tsunami hazard into community or national emergency plans.

However, Ms. Hinds admitted that there were three outstanding areas which needed to be addressed. Those, she outlined, were producing the easily understood evacuation maps; designating the hazard zones, evacuation routes and assembly areas; and designating and mapping the tsunami hazard zones. 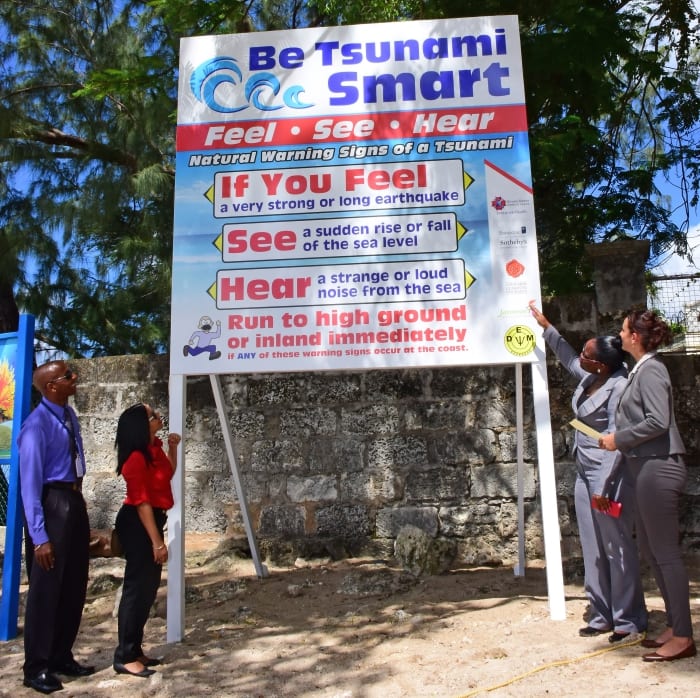 The Road to Tsunami Recognition campaign started last year with the unveiling of a tsunami sign at the Folkestone Park and Marine Reserve in Holetown. (C.Pitt/BGIS)

“We have been very successful in terms of the public outreach and ensuring that we address the tsunami hazard within our emergency operation plans. We have a National Emergency Operations Centre and we have a way of communicating with and warning the public.

“You will find that the areas that we now have to really focus on is the science of it in terms of producing those maps that people can act on,” she said.

She added that once the UNESCO Recognition Board was satisfied that Holetown met all its requirements, the recognition would be awarded through an official ceremony and with a plaque indicating that it was now a Tsunami Ready Community.

“Holetown’s recognition will stay in place for three to five years. If after that you want to maintain the Tsunami Ready status, you have to go through the process again. It would be a case of doing the annual drills and maintaining the public awareness programme,” the DEM Director revealed.

Once successful, Holetown will have the distinction of being among a number of countries and territories that have the UNESCO internationally approved Tsunami Ready Certificate of Recognition.

Ms. Hinds said the recognition would say to the world that Holetown was active in promoting readiness for any kind of emergency and that the community is more prepared to save lives.

“It says to the world that we have identified the community readiness resource needs…we have taken the time to say what it is that Holetown requires to improve its readiness and it also says that the community in Holetown readily engages its contact with the emergency services, so that they know what they need to do or who they need to contact.”