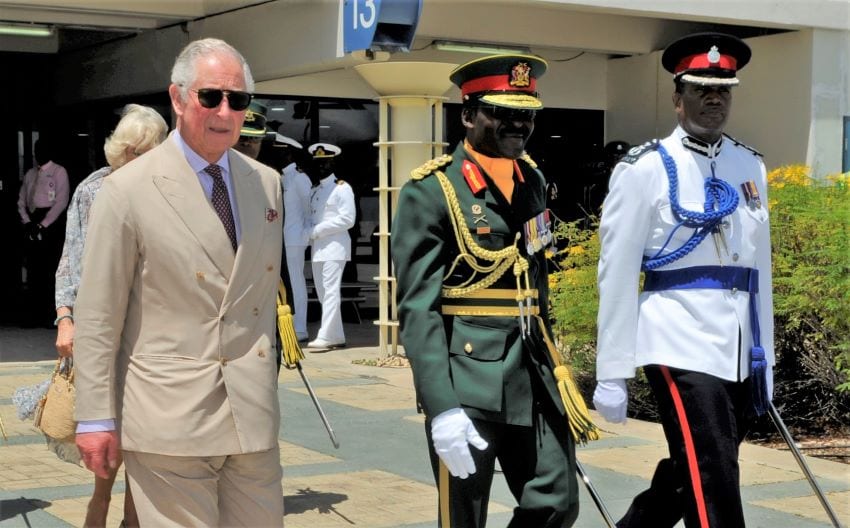 Their Royal Highnesses, The Prince of Wales and The Duchess of Cornwall (partially hidden) head to the Royal Air Force Voyager aircraft this afternoon to depart Barbados for Cuba. (BGIS)

Their Royal Highnesses, the Prince of Wales and the Duchess of Cornwall, left Barbados today after an official two-day visit on March 19 and 24.

They departed the Grantley Adams International Airport aboard a Royal Air Force Voyager aircraft at 12:50 p.m. on their way to Havana, Cuba.

Prior to their departure, the Prince of Wales was given a Royal Salute by a 96-strong detachment of the Barbados Regiment and the Barbados Defence Force’s Band in Zouave uniform.

The prince and the duchess were greeted on the red carpet by a host of government officials at the Grantley Adams International Airport.

During their visit on Tuesday, the royal couple first met with Governor General Dame Sandra Mason.  The Prince of Wales laid a wreath at The Cenotaph in National Heroes Square; met with Prime Minister Mia Amor  Mottley; visited the Nidhe Israel Synagogue and Soroptimist Village; and learnt about this island’s emergency preparedness efforts, and the work of the Prince’s Trust International on the island.

The Duchess of Cornwall attended a Women of the World Think-In at Ilaro Court; and toured the Derrick Smith Vocational Centre and the Maria Holder Diabetes Centre. Later that evening, a reception was held in their honour at Government House.

A highlight of the visit came when the royal couple interacted with a cross section of Barbadians in a meet and greet at National Heroes Square and along Roebuck Street.

They are on a 12-day tour of Commonwealth nations, Cuba and the Cayman Islands.