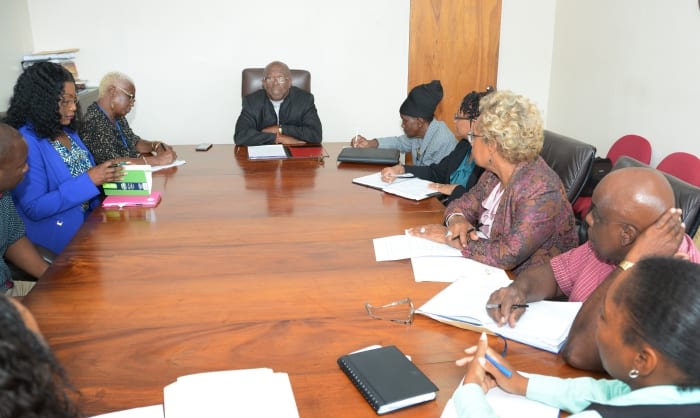 Garbage collection was first on the agenda for new Minister of Environment and National Beautification, Trevor Prescod, as he met with officials from the Sanitation Service Authority (SSA) on Monday afternoon.

Mr. Prescod explained that the meeting was necessary as issues related to garbage collection were on the Mission Critical List which outlines priority issues to be tackled by Government.

“The collection of garbage is a critical issue to be addressed. It is the most urgent of urgent and this is the first department I stopped at,” he said at the onset of the meeting.

The new Minister was updated by Acting General Manager of the SSA, Rosalind Knight and Acting Deputy Manager of Operations, Shawn Phillips, on the operations of the SSA and the current situation as it related to garbage collection, disposal and landfilling.

He was also apprised of systems in place to purchase new trucks for the SSA and challenges currently being experienced.

Following the meeting, the Minister said he was in a better position to report back to Cabinet on the status of the SSA and work towards paving a way forward.

Permanent Secretary in the Ministry of Environment and National Beautification, Daphne Kellman, other Ministry and SSA officials also attended the meeting.