The influx of sargassum seaweed on beaches across Barbados is being treated as a national emergency by Government.

Topping the priority list in tackling the issue is its removal from seven beaches along the east and north coasts, but Government is also exploring alternatives for which it can be used, including converting it to a viable energy source.

“We believe that the sargassum is not just a problem but it is a resource, and we have to use it as a resource,” said Minister of Maritime Affairs and the Blue Economy, Kirk Humphrey, during a press briefing at Bath Beach on Friday.

He reasoned that the seaweed could be drained and taken to the Sustainable Barbados Recycling Centre where it could be used.

“We are also in conversation with the private sector to use the seaweed to create energy so that it is not just taken and wasted. We have already seen that it can work. It can be created into real energy so that it can be used to fuel Barbadian households and help the country,” the Minister said.

Mr. Humphrey explained that the University of the West Indies had already started research on converting the seaweed into energy, but stressed that it had to be done at a time when it was golden.

“What we are getting here now is something of value. We consider it harvesting the seaweed because we can use it for something else,” he said, while noting that the seaweed would deteriorate and would no longer be viable by the time it reached the tourism belt on the south coast. 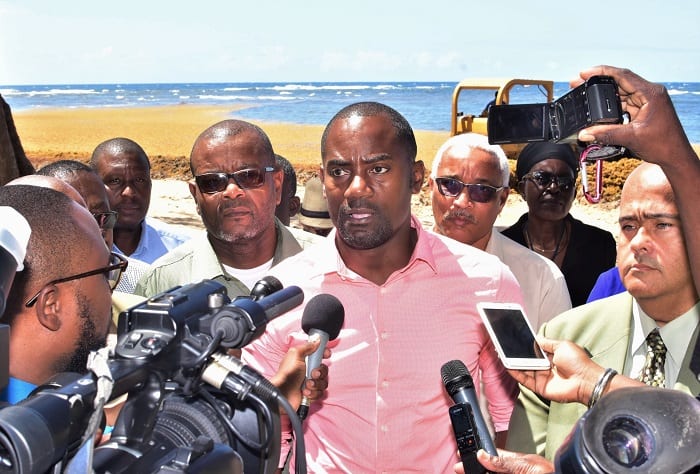 “I am making the call now for a number of people in the private sector to join us, not only in terms of dealing with the immediate issue of taking it off the beaches, but also in terms of being able to convert it into something that is useful,” he said.

He stressed that whether the seaweed was used as a fertiliser, as an energy source or in another form, Government would require the assistance of the private sector. “And by assistance I mean that they come on as a partner and say this one is for Barbados,” he pointed out.

However, the Minister lamented that Barbados did not have a plant to handle the magnitude of seaweed that was now washing in on Barbados’ shores, but remained optimistic that the island could have one within the next few years to allow it to process the seaweed and other grasses.

In the interim, Mr. Humphrey said Government was encouraging  Barbadians to take the seaweed and to use it in their gardens. We are informed that if you wash it off it can be useful to the gardens. 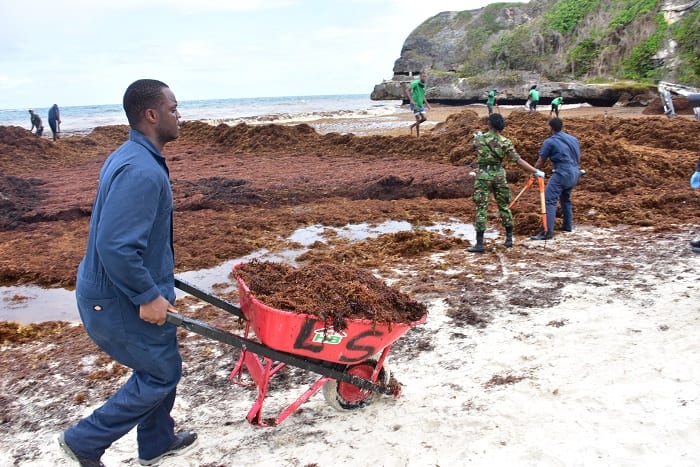 Meanwhile, as part of the response to the national emergency, Barbados Defence Force personnel have been deployed to Bath Beach, St. John; Skeete’s Bay, Foul Bay, Crane, St. Philip; Silver Sands/Enterprise, Long Beach area in Christ Church; Barclays Park and the East Coast, St. Andrew to begin the process of removing the seaweed from the shoreline.

Chief of Staff of the BDF, Colonel Glyne Grannum, said the state agency was proud to be a part of the effort. He added that the BDF had already established a distinct Coordination Centre designed to assist with the coordination of Government and non-governmental organisations, private citizens, and to harness the effort to deal with information management.

Furthermore, he stated the BDF had also employed an unmanned aerial vehicle to scan the nearshore coastal area to determine the threat from further offshore. That scan, he said, would allow officials to see how many waves of the seaweed were likely to come ashore and within what timeline.

“Within the next 24 hours we should be going out on a further surveillance and recognisance mission to get a sense of what is further offshore, to be able to harness that information into decision making relative to the deployment of troops, the deployment of the joint inter-agency community of effort which is needed to deal with the threat,” the Chief-of-Staff said.