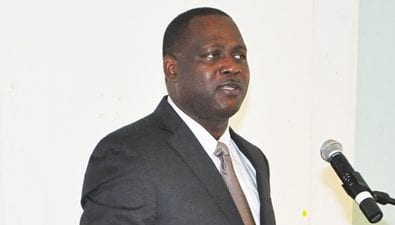 The Small Business Association (SBA) will have the opportunity to sit on a number of boards which fall under the Ministry of Industry to ensure that the voices of micro, small, and medium enterprises are heard.

Minister of Industry, Donville Inniss, made this pledge to the SBA last Saturday while delivering the feature address at the Association’s awards ceremony and cocktail reception at Radisson Aquatica Hotel.

In commending the SBA for its sterling leadership in the sector, Mr. Inniss told the gathering that Government would continue to explore ways to deepen the relationship with the sector beyond the provision of small subventions.

“For me, it is not a matter of just providing a small subvention to the SBA. We treasure immensely, the dedication of the board and staff and all the members of the SBA and I have come to the realisation unrepentantly, that the entity is perhaps one of the stronger advocacy organisations in Barbados,” he emphasised.

Apart from a seat on Government’s Boards, the Minister alluded to plans to find a mechanism in which the state can guarantee that a percentage of its goods and services are procured from the small business sector.

He articulated the view that if the country was to build a far more resilient economy, then more emphasis must be placed on the micro, small and medium enterprises.

In this vein, Mr. Inniss gave the undertaking to roll out the polices as contained in the National Policy for the Small Micro and Medium Enterprises, which was laid in Parliament in February.

With a national agreement on the definition for the sector reached and a greater understanding about the challenges affecting the sector identified, Mr. Inniss promised that his Ministry would “move with alacrity to ensure that the Government of Barbados adopts a policy where 40 per cent of goods and services procured by Government will be procured from the micro, small and medium enterprises sector”.

“We could not have done it before we had gotten those other things right and therefore I expect that this is a matter that we will not just be speaking much more about in the coming weeks, but we will be actually able to sit with the small business association partners and start to design the methodology for making it work,” he stated.

During the event, awards were presented to small business firms in the categories of Caribbean Vocational Qualification, Sectoral, Group Association, Pioneer, Small Business of the Year, People’s Choice and the President’s Award.