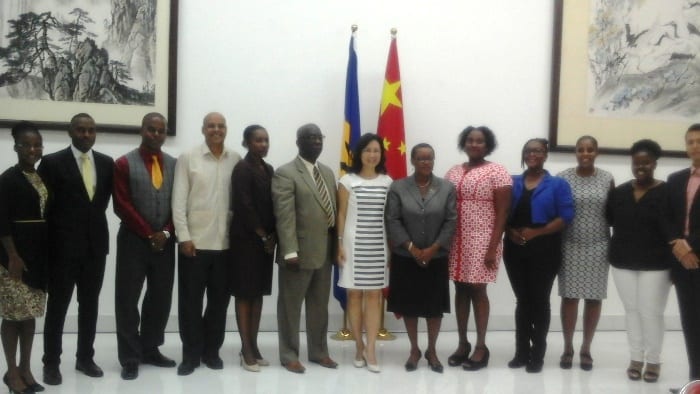 Minister of Education, Ronald Jones, has encouraged the 2016 Chinese Scholarship winners to take the opportunity to explore the Chinese culture while studying in that country.

He imparted this advice on Monday evening at an official ceremony held at the Chinese Embassy, Golf Club Road, Christ Church, to recognise the recipients of this year’s Chinese Government Scholarships.

Mr. Jones told those gathered: “I hope you go off to learn what you will be studying, but also to learn in the broader perspective the culture, language, relations and dynamics of that civilisation.” The students were reminded to conduct themselves “as ambassadors of Barbados” and were urged to be mindful of their interactions with others.

In a brief congratulatory message to the eight winners present, Minister of Foreign Affairs and Foreign Trade, Senator Maxine McClean, also shared the view that people-to-people contact was one of the ways in which “we can most rapidly advance our bilateral relations”.

“You have taken advantage of an excellent opportunity afforded to you by the Government and people of China, and it certainly should not be taken lightly,” she stated.

In addition, Senator McClean noted that since the establishment of diplomatic relations with China some 40 years ago, Barbadian students continue to benefit from many training opportunities.

She lauded the most recent scholarships from the Government and people of China, and highlighted that such educational opportunities remained paramount to the advancement of Barbados.

“Education has been and continues to be of unparalleled importance to the development of Barbados. It has been as you know the foundation of its social and economic progress…in the post-colonial period and certainly in the post-Independence period,” the Minister pointed out.

Studies in Quantitative Economics will be pursued by Matthious Willie; and Business Administration by Daniesha Maynard. Jamar Rock, who is already in China, will pursue studies in Architecture.